On Tuesday, March 27, Associate Professor of Art Peter Roos gave a discussion on the large gallery installation of his figure drawings in the Thorne-Sagendorph Art Gallery. 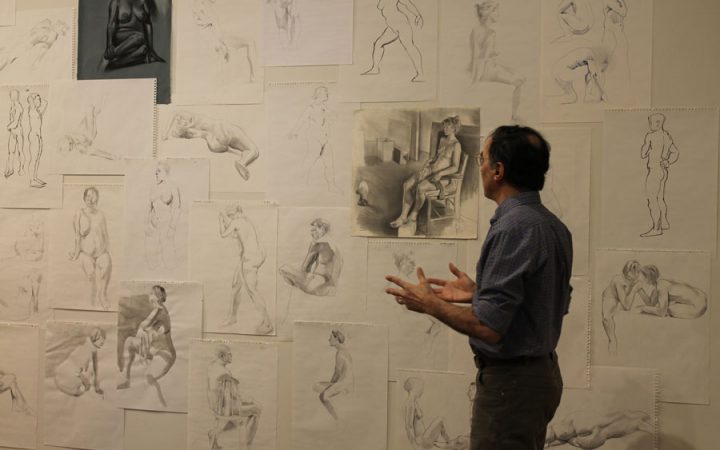 Roos attended Syracuse University as an architecture major, but switched to art after taking his first college class: figure drawing. Roos has been working as a figure artist since 1975.

“The human figure is one of the most complex forms to draw and, yet, is also the most familiar and expressive,” Roos explained. “Drawing the human figure has been a time-honored tradition in an artist’s education.”

His work on display will be the last faculty exhibit at Keene State College because of his upcoming retirement. The exhibits display his figure drawings over the span of 27 years, beginning in 1990. His drawings showcase a wide span of styles, as well as methods, such as pencil, pen, brush and ink and watercolor. However, his art shown currently in the Thorne is only a fraction of his portfolio.

Through his figure drawings over the span of his career, Roos pointed out the progress of his art by saying, “As you change, the things you find important change.”

Down the road, Roos claimed, he has ideas for painting. “Drawings are the start of an idea,” Roos said.

He plans to spend more time creating his own work, after teaching for years. Roos also said he hopes to rediscover himself as an artist. “I’ve been teaching figure drawing and painting since I started at KSC. But, no matter how many times one draws from the figure, there is always more to learn,” Roos said.