What do you make of two violinists, a violist, cellist, mezzo-soprano vocalist and a pianist? How about Christina Wright-Ivanova’s faculty recital.

Dr. Wright-Ivanova presented her first faculty show on Wednesday, March 28 starting at 7:30 p.m.. She performed on piano with Lydian String Quartet, violinist Andrea Segar and then separately with mezzo-soprano vocalist, Megan Roth, who sang a German music piece during the first part of the performance. In the second half of the show, Dr. Wright- Ivanova played the piano accompanying the Lydian String Quartet. Traditional and classical styles were very pronounced within the performances throughout the show. 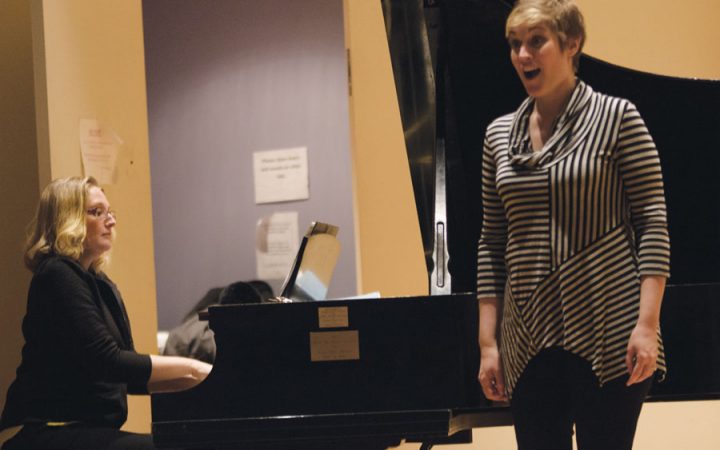 Dr. Wright-Ivanova came to Keene State College last fall as an assistant professor of music and the coordinator of piano/collaborative piano. She came to KSC to teach as well as perform professionally with students and other musicians.

Dr. Wright-Ivanova started taking piano lessons when she was four and a half years old. Once she turned 12, she and her family moved from Guernsey, an island in the English channel, to Vancouver, Canada.

Within those next few years she began to realize piano was what she wanted to do on a more serious note. “I think at about 13, 14 I really knew I wanted to have piano be a major part of my life,” Dr. Wright-Ivanova said. Dr. Wright-Ivanova stayed in Canada to get her undergraduate degree in solo piano. After graduating, she moved to Boston to get her master’s degree where she started to explore chamber music.

Dr. Wright’s-Ivanova’s performance on Wednesday night was mainly pieces of collaboration, which she explains as, “The art of playing with other people and the art of accompanying other people. What we call collaborate piano.”

To finish her music education career, Dr. Wright-Ivanova graduated with her doctorate degree from Austin, Texas. She then moved to Boston to teach, then to Las Vegas and now she is settled in Keene, NH. At Keene State College, she teaches music classes, mentors students, and performs with students, staff and musicians.

Dr. Wright-Ivanova said that preforming is very important. “There is nothing more important than getting your music out there; both as a composer and an artist,” she said.

As she started performing more professionally, she began to feel that playing the piano was a way to express herself and the music style she was interpreting. Dr. Wright-Ivanova has experience playing with many types of professionals and styles, like the ones she brought to the performance Wednesday night.

Dr. Wright-Ivanova played the piano while collaborating with Mezzo-soprano singer Roth, who sang in the first part of the recital. Both musicians alongside each other on this piece showed passion and emotion for the story being told. This dramatic German piece called Frauenliebe und Leben by Robert Schumann is full of love and loss. It follows a woman who meets the man of her dreams, but then he passes on, which makes the woman very heartbroken because one of her greatest loves is now gone, Roth explained.

“It goes through her whole life of loving him, getting married, having a child, then he dies, so presumably her life is over,” Roth said.

The second part of Dr. Wright-Ivanova’s recital included a performance by two violinists, a violist, and cellist that make up the Lydian String Quartet. Along with Segar playing first violin, Joshua Goron plays the cello, Judith Eissenberg, one of the founding members of the Lydian String Quartet, plays the second violin, and Mark Berger plays the viola. Mark Berger said, “The quartet was actually formed in 1980 at Brandeis University. We are all professors of the practice… so we do a lot of teaching at the school as well as play at concerts and tours.” Berger said the Quartet usually performs classical music, like at the recital, but they are very open to trying new styles of music. The Lydian String Quartet performance with Dr. Wright brought the faculty recital to an end.

Laurel Mendelsohn, a vocal performance student at KSC, attended Dr. Wright-Ivanova’s recital and said, “I think [the recital was] phenomenal. Dr. Wright-Ivanova is an amazing collaborator and pianist.” Dr. Wright-Ivanova is Mendelsohn’s collaborative pianist for her voice lessons as well as her mentor. Mendelsohn said she is inspired by the pieces that were performed. “I am so blow away by the music, it’s gorgeous, and it’s what I want to be able to create as a musician myself in the future. I work to try to be more like the people I see on stage.”

Kiana Wright can be contacted at kwright@kscequinox.com

The concert experience Previous
Learning at KSC Next 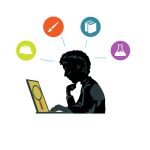