KSC welcomes ‘Secret of the Seasons’

Not one person alone can stop climate change.

It requires teamwork and cooperation, which encompasses the idea of the “co-opera.” 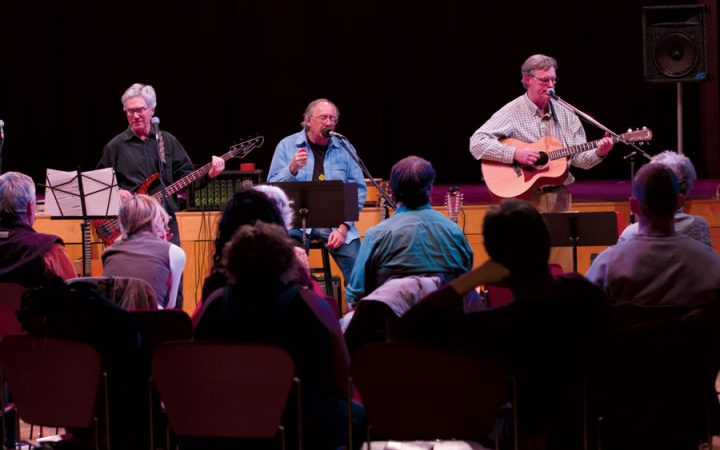 On Friday, March 23, a group of musicians from the School for International Training (SIT) in Brattleboro, VT came to Keene State College to present their original co-opera, “Secret of the Seasons.” A co-opera is a show that is not only put on by the performers, but also includes the audience members. Throughout the show the audience was invited to sing, dance and play along with the musicians when they were handed percussion instruments.

Between songs, viewers were asked to discuss certain topics as they arose with fellow members seated around them.

After a brief discussion, all the groups came back together and were asked to share what they talked about.

The show’s writer and Professor at SIT, John Ungerleider, explained his inspiration behind the creation of the co-opera. “People talk about issues with climate change and how we address them, especially how we address the emotional challenge,” Ungerleider explained. He continued, “The music helps us deal with the emotions, especially fear, denial, and how we transform that into action. It’s such a big issue and it’s easier to go, ‘I can’t deal with it, want can I do?’ So hopefully this helps people shift their focus.”

When asked what Ungerleider hoped the take-away from the performance would be, he responded, “To figure out by the end of the show what are some personal and political actions they could take, and it’s not just personal, it’s not just recycling and changing light bulbs. It’s got to be some social policy, some collective action.”

Assistant professor of environmental studies Thomas Webler first saw the performance in Brattleboro back in October.

From there, he decided it would be beneficial to his students, as well as community members, to see the show. “We need to communicate in lots of different ways about climate change. It helps us to personally reconcile what’s going on and talk about our personal reaction, but to also communicate and be with others in a positive space about it,” Webler said.

During the performance, Webler did a presentation about how global warming occurs.

After explaining the process, Webler invited audience members up to do a series of demonstrations to simplify the science behind climate change. Senior and environmental studies major, Hannah Rettig, decided to attend the event after receiving a recommendation from Webler to come, and was pleasantly surprise by the show. Rettig said, “I heard about it through Dr. Webler and I was interested to see what it was about.” Rettig added, “I really had no idea what to expect, but I really liked the music and I felt they did a great job with that.” Rettig continued, “This is something that we’re all working towards as environmental studies majors and to come here and hear people sing about it, because we talk a lot about it all the time, but to add music was really fun.”

The point that Ungerleider kept pushing was the process of moving away from fear to change. Earth is continuing to experience extreme weather conditions all over the world. However, instead of worrying about what could happen, Ungerleider urged people to think about the changes that they can make to help. While not a single person alone can fix the environmental crisis, the little changes can help. As John F. Kennedy once said, “One person can make a difference, and everyone should try.”

Erin McNemar can be contacted at emcnemar@kscquinox.com 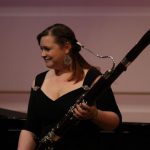 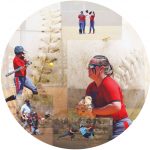 KSC welcomes ‘Secret of the Seasons’