‘The Steinberg Duo’ returns to the Redfern

On Sunday, February 18, music lovers from all over the Monadnock region came together in the Alumni Recital Hall of Keene State College’s Redfern Arts Center to see the famous Steinburg Duo. 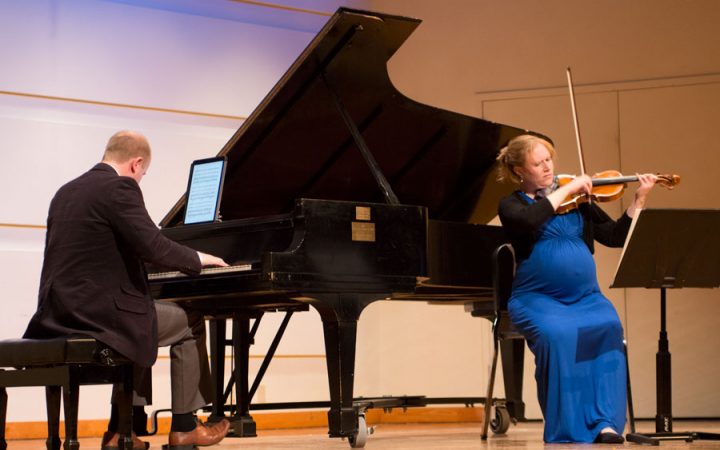 “Technically perfect and musically profound” as described by Jerry Levy, a retired sociologist from Brattleboro, Vermont.

KSC Music major and senior Jacob Huggins said he could speak for everyone that was there; everyone spent their Sunday in the best way they could.

The Steinburg Duo — Louisa Stonehill on the violin, and Nicholas Burns on the piano — performed a “New Year’s Gathering” theme of music by Tchaikosvsky, Brahms, Liszt and Grieg.

Levy added that the Brahms is very difficult to play, but there was the sweetness, the congruence and the insight.

He said musically, the Brahms was just ethereal, the texture of the piano; the support that the piano gave to the violin was amazing.

He said that he hadn’t seen a string player having better balance than Louisa had.

Burns said it was a real challenge for Louisa to play because she is due to have a baby in 2-3 weeks.

“That’s why she was sitting, she would normally not be sitting and, also because she’s pregnant, her hands are quite swollen,” Burns said, “We have ice packs and all sorts, backstage to make it kind of happen.”  Burns said that they met through music.

“I was conducting an orchestra and Louisa was the celloist. It’s a real cliché,” He laughed.

According to the Steinburg Duo’s website, in the Summer of 2016 the duo emigrated to Keene, New Hampshire.

“It is not an exaggeration that we plucked it of the map,” said Burns. He said they were googling best places to live in New England and dropping pins on the Google map and that’s when they found Keene.

“It is very well situated, and I really don’t want to live in a city anymore.”

They have since repeatedly appeared at the Redfern Arts Center at KSC according to the website.

She said the show was successful, “but the weather probably, the snow from last night, may have kept some people away; We were hoping for a larger audience but the people who were here really enjoyed the show,” Shields said, “The Steingburg Duo has a great following in the Monadnock region.”

The Steinburg Duo has been telling musical stories on stage since 2007 through imaginative programming, emotive interpretations and captivating performances according to the Steinburg Duo’s website.

Huggins said he was learning just by listening to what they were doing.

In November, 2018, they will be traveling China according to their website.

“It’s going to be an interesting experience, because it’s 8 concerts in 11 days,“ Burns said.

“They are both, without a doubt,  world class players, they have total control over their instruments, on what the piano and the violin are capable of,” said Levy. 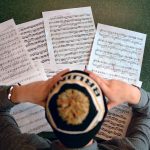 Facing the music Previous
The Fundamentals of Caring Next

‘The Steinberg Duo’ returns to the Redfern