Running around the seasons

Being a student athlete is no easy task, but it’s even more challenging when the athlete performs year round.

For a small group of students at Keene State College, their fall and spring semesters consist of both getting an education and playing sports. 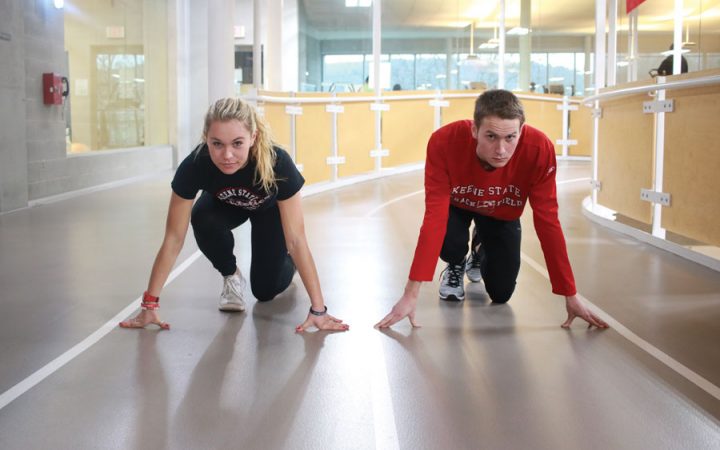 While also completing majors in management and economics and safety studies, juniors Jared Hannon and Taylor Bisaillon are two of the year-round atheltes. Hannon runs on the cross country team in the fall, and Bisaillon plays on the soccer team.

This season, the two student-athletes have already made strides at the Indoor Track and Field team’s first invitational meet.

Hannon and Bisaillon placed first in a few of their respective events at the non-scoring invitational at Smith College on Saturday, Dec. 2.

Hannon came in first place for the men’s long jump with a jump of 6.63 meters, according to KSC’s athletic website. He also earned second for the men’s 200 meter dash, running 23.56 seconds.

The group Bisaillon was in earned second, running 4:21.81 minutes.

It was the team’s season opener, and was described by the Cross Country and Track and Field team’s coach Tom Pickering as a “rust buster.”

“No one’s done any track events for over six months. You’re just allowing athletes to get back into the swing of being on the track and getting a feel for the events,” Pickering said. “So we’re using it kind of almost like a practice.”

After just the first meet, Hannon has already broken his personal record for the 200 meter dash.

He shaved off almost 0.2 seconds, going from 23.7 to 23.56 seconds. “It’s always looking like a good season when you start out already beating your best from last year,” Hannon said.

Bisaillon said she is at a good starting point for shot put, throwing farther now than at the same time last year. She also ran the 600 meter for the first time. “I won that event, which was really cool because I thought I was going to die,” Bisaillon  joked.

Hannon and Bisaillon both said they have goals for this season, and are working to accomplish them.

Hannon hopes he’ll make it to the National Collegiate Athletic Association (NCAA) Championships this year for the long jump or 400 meter dash.

Pickering said Hannon is a three-time conference champion for long jump and is close to beating the school record.

If he does, Pickering said, Hannon “will be in the conversation for making nationals.”

“Jared is one of our top student athletes at Keene State, and so we expect a lot out of him,” Pickering said. “He is a real leader. He is the guy that pushes the other guys. He’s the guy that gets other guys fired up.”

As for Bisaillon, she and the Assistant Coach for Cross Country and Track and Field Nick Athanasopoulos will be working to train her for a heptathlon – one event comprised of seven smaller events: 100 meter hurdles, 200 meter dash, 800 meter run, long jump, high jump, shot put and javelin, according to International Association of Athletics Federations’ website.

“I think it’s really cool that I can run but also throw a lot. A lot of track athletes just have their one thing and they stick to that,” Bisaillon said. “I just think it’s the biggest challenge an athlete can have because you’re literally doing everything… it’s crazy.”

Pickering said both Hannon and Bisaillon are “top student athletes,” and always do what he and Athanasopoulos ask.

Athanasopoulos added to Pickering’s comment, saying, “They do a good job leading the team through practices. [They] always [have] positive mindsets.

They’re good examples for the other teammates.”

The next Indoor Track and Field meet will be held at Dartmouth College on Sunday, Jan. 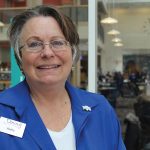 Humans of KSC Previous
The constraints of basketball season Next 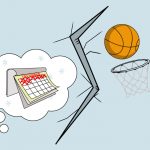