Students simulate the challenges of poverty

Poverty is often a difficult and painful topic to bring up. Many people have lived through it, yet there are many people who do not know enough about it. 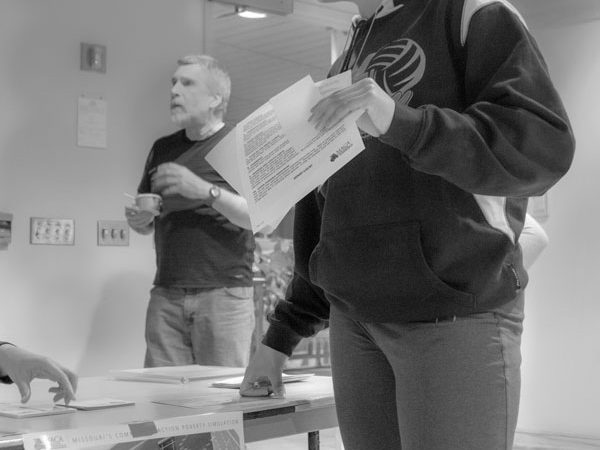 Even so, there is still poverty. According to globalissues.org, almost half the world lives on less than $2.50 a day.

In order to bring awareness to this issue, Balnis and KSC student and President of Habitat for Humanity Riley Beliveau held a poverty simulation in the L.P. Young Student Center’s Mabel Brown Room.

On Wednesday, Nov. 1, about 23 people came to the simulation to get a better understanding of what it’s like to live in poverty for a month.

Every 15 minutes of the activity equaled a month of the simulation. Twenty-six volunteers helped out the event, by running the booths in the simulation to playing different roles in keeping it realistic.

Each participant was assigned to a family and had to play a character they were given. Every family was complex and unique and had their own set of obstacles, which included disabilities, age and health issues.

Everyone started out with a certain amount of money. There were 14 booths that each participant went to for certain services: The Trust National Bank, a food market, a pawn shop, a utility company, a child care center, a health clinic, mortgage and realty and even a police station. To add a more realistic atmosphere, they even had a few criminals doing illegal activities, such as stealing from family houses and buying and selling drugs.

Balnis said she hoped that the simulation would be a valuable learning experience, rather than a game.

Balnis, who has worked with people from low income programs in the past, said she first got involved with the poverty simulation last fall.

She said she is hoping to do more poverty simulations in the future.

Sociology Professor and Assistant Dean of Social Sciences Dr. Margaret Walsh brought her students to the simulation for the first time this year. Half of her Introduction to Sociology class came to the event and she said the other half of her class will come to the other simulation, which is being held in a few weeks.

Walsh also volunteered at the simulation by running the Community Action Agency booth, where one of the services was to help participants who have been victims of theft and other incidents.

Walsh said she was happy with how seriously the participants took the simulation.

“I was surprised and impressed how quickly people began to take this role-playing exercise seriously,” said Walsh. “It wasn’t a game, it was something that they quickly began to understand because they were running out of the funds they needed to get through the month for themselves and their families.”

Overall, half of the participant families got food at the market, the bank booth found they had debts piling up each week and only one application process for Social Services was successful.

All, but one family, were affected or involved in criminal activities, and many students had their children taken away.

KSC sophomore Luke Gorham came to the simulation as a requirement for his class, Health and Society.

Gorham said in the simulation, he had to sell all of his furniture to come up with the money amount he needed. Overall, he said his simulation experience was worth it.

“I think it was worth it because it’s always nice to have a hands-on experience when you’re learning the concepts or whatever because it’s one thing for [my professor] to tell us it’s tough and [another] for us to learn about it,” said Gorham. “But when you really get to experience being stressed out and not having enough, it’s a different type of learning [and] more applicable.”

Balnis said snacks will be provided at the end of the simulation.

She is hoping to have two more of these poverty simulations next semester.

Students simulate the challenges of poverty