Monopoly, The Game of Life, Chutes & Ladders and Clue are board games that almost everyone has played before. People always have at least one of them tucked away in their back closet or under their coffee table. However, no one ever wonders how games like these classics came to life. 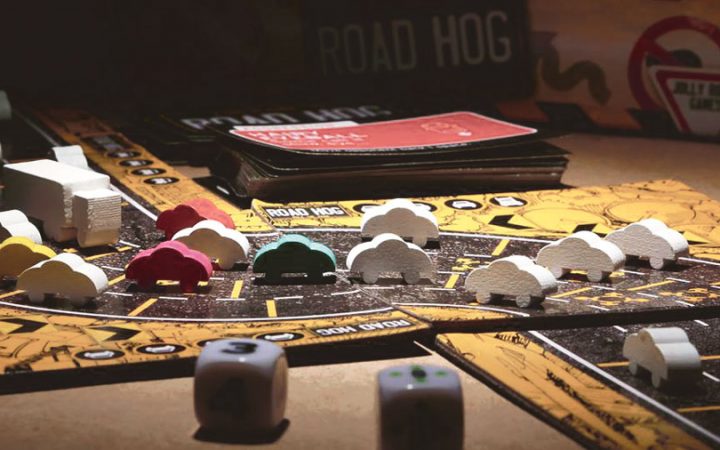 Keene State College graphic design Professor Randall Hoyt sheds some light on the process of creating, publishing and selling a board game, after recently attending Spiel, the largest board game trade fair in the world, held in Essen, Germany. Over 100,000 people come to the convention to play and learn about different games.

Hoyt brought along his own creation this year, “Road Hog,” a game he started to create in 2007.

The game centers its focus around literal in and outs of traffic, and breaking the road rules you might have to follow in real life.

There are many white car and truck “traffic” game pieces, five colored player cars, a deck of varying action cards, two die and interchangeable board tiles that create the “road.” Players try to get to the exit first, moving traffic cars to strategically block other players while getting ahead themselves. Between the dice and the differing cards players draw, different actions can be made within the game.

Hoyt said over the course of the four-day convention, he played over 60 games of Road Hog with convention attendees, of all ages, some who did not even speak English. At every convention and event Hoyt has been to and brought the game to, Road Hog has sold out. With over 10,000 copies in circulation throughout the world, Road Hog has been purchased by people from as far away as Germany, Australia, the UK, even New Caledonia. Before having the game picked up on by a publisher, Hoyt faced a lot of skepticism from peers on whether a game based on traffic would ever be successful.

One of Hoyt’s Advisees and graphic design student Joseph Miffitt took a Board Game Design class with Hoyt over the summer. Miffitt said he is a self-proclaimed board game geek, and knew right away he had to take that class. 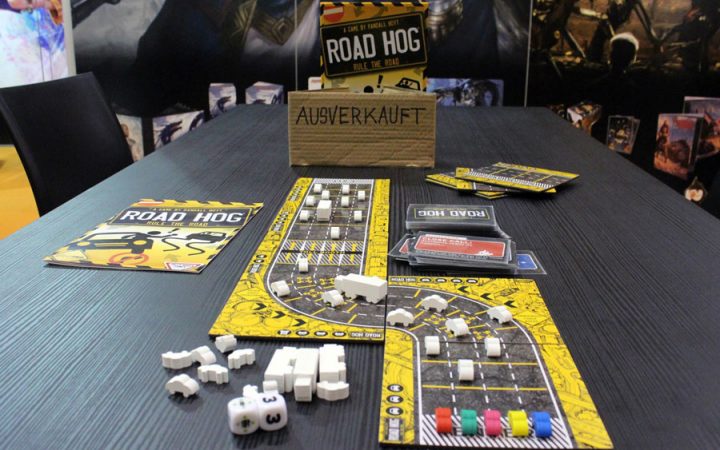 “It definitely is the world I want to go into as far as graphic design is considered,” Miffitt said.

The final game created by Miffitt was called “Blood and Iron,” a tank combat simulator game.

“Mechanics and aesthetics are the keystones in a successful board game,” Miffitt said. “Gamers all have a very very unique taste for aesthetics.”

This upcoming semester, Miffitt will be working again with Hoyt in an independent study to further tabletop game design.

“Since about middle school I’ve always sat down and made up silly little games for me and my friends to play,” Miffitt said. “Under his advising, I’ve learned how to actually produce a game. Though his experience in producing Road Hog, I’ve learned how to produce my game, Blood and Iron.”

Bachelor of Fine Arts (BFA) graphic design major Gavin Schlerf also took the Board Game Design class over the summer, creating one game called Mosh Pit. The game focused on crowd dynamics in a concert, with a player’s objective to force their way through the crowd to reach the front of the stage. Schlerf said the process of creating board games can really help a graphic design major learn how to create working designs.

Schlerf said, “I have to say, Randall Hoyt is probably one of the best professors I have had throughout my college career, just because he was able to really critique anyone in anyway possible… that’s really important in the design world.”

Hoyt said his own inspiration for the Road Hog came from his own time spent driving in Connecticut and studying traffic, driving from New Haven to New Hampshire every other weekend. He originally was going to make a book on passive-aggressive driving, but then just started making it a game instead.

“I learned how to drive like a shark,” Hoyt said.

Hoyt said the game’s reception in Germany was in high regard. In fact, a German man Reme Kramer has taken it into his own hands to translate the game cards from English to German. The ideal for Hoyt would be to have the game made in German too.

“To have a player say ‘I’d like to share this with my gaming group. Can I translate all your cards, please send me images,’” Hoyt said. “That was this morning. By this afternoon he had already translated them.”

Hoyt and Road Hog (then named Turnpike) was featured in a documentary 3 years ago, where it picked up traction. Hoyt is also in the process of filming an epilogue on what the processes are like for an already published game, and where Road Hog is heading in the future.

“I wanted to make an experience that was fun to play,” Hoyt said. “My idea is that if you can make something that people hate fun then that’s a big win.”

Meridith can be contacted at mking@kscequinox.com 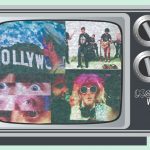 Music video madness Previous
Compositions from around the globe Next 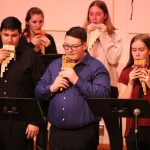