At the municipal services, facilities and infrastructure committee meeting on Wednesday, Sept. 27, Lane proposed an ordinance that would fine landlords for police calls to properties more than three times a year for issues such as noise complaints, fighting, alcohol abuse, etc. More specifically, if the landlord hasn’t taken any steps to rectify the recurring problems, “the landlord is potentially liable for fines as result as failure to appropriately manage property,” Lane said.

The exact fine amount is unknown, for at this stage, it’s mainly a discussion being had with the City Council.

The reason for the disorderly property ordinance? Lane said when police have to make repeated trips to properties, the taxpayers are technically paying to manage somebody else’s business.

Historically, citations issued by police tend to spike every October. In 2016, there were only two off campus properties that would have been affected by this ordinance, located on Church Street and Marlboro Street. Because of how minor the impact is going to be on tenants, Lane said he’s not expecting it to have a major impact on landlords either. “It’s really pretty minor, but it’s one attempt to address a financial problem,” Lane said.

Chief Operations Officer of Keene Cribs Trevor Grauer begs to differ, however. As someone who said he does everything in his power to prevent problems and nuisances from occurring at any of his properties, he believes there are “plenty” of ordinances, local and state laws already in the books that can be used.

“I think the city looks at it that there’s just a bunch of absentee landlords that don’t care what happens, and maybe that’s the case for some landlords, but that’s definitely not the case for me or Keene Cribs. I definitely care what happens at my properties, I definitely care what my business presentation is to the town and the representation that I have and my tenants have. I went to Keene State. I don’t want it to be a negative impact.”

Because of this, Grauer said he’s not quite sure what levying a fine to landlords is going to do to solve the problem. “I think they need to be holding the residents of the property responsible for the actions that are occurring at the property. I think right now, a lot of times, they’re getting warnings and there are no repercussions for the actions and so that allows the behavior to continue. If someone gets slapped with a fine that they’re proposing to levy against the landlords, if the local residents get that fine, I think the behavior will stop.”

In terms of landlords getting notified about disorderly properties, Grauer said it’s very difficult to find out if there are problems occurring. 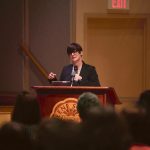 Progress on the budget Previous
KSC prepares for Pumpkin Festival Next