“[Maher has the] type of leadership abilities that our department and institution would benefit from,” Atkins said.

Maher will continue to act as the Title IX Discrimination and Harassment Coordinator in conjunction with being the director of Campus Safety.

However, the school will be hiring an investigator to work alongside Maher in his Title IX position. Within the next few days, a date will be finalized for Maher to begin his new position, according to Atkins. 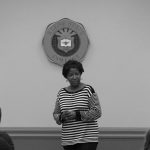