What an extravaganza eleganza! This past Friday, Oct. 6, Keene State College welcomed the talents of professional drag queens Mizery McRae, Destiny and Dusty Moorehead-Malletti for the show Glitterati and Glamazons. All three queens lit up the stage of the Mabel Brown Room, dazzling the audience with multiple glittering costumes, snatched wigs and a diverse song repertoire.

The event itself was hosted by KSC After Hours. Coordinator of Student Activities and Organizations Britany Gallagher was a key person in the organizing of the event. KSC Pride and Mentors in Violence Prevention both had tables at the show as well. 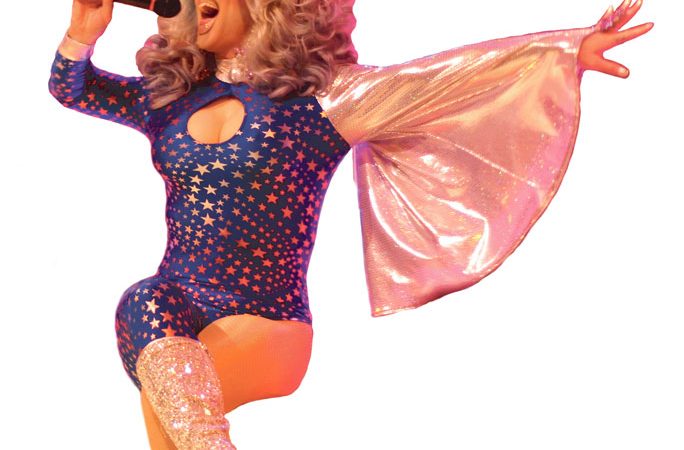 Gallagher has had experience with attending drag shows during her undergraduate and graduate college experiences and said she wanted to bring that type of experience to KSC students.

“I think [the show] was enough to kind of push some boundaries, maybe, and maybe push some students to get outside of their comfort zones and maybe start exploring different identities,” Gallagher said.

Gallagher prefaced the event with a brief history and movie covering some of the history and impact drag has had and currently has on the LGBTQ+ community. The movie shown featured Devlin Andrews, who performs as a drag queen.

Gallagher talked about how drag is a performance of how society views gender, and queens can identify as male, female, gay, straight, trans- there really are no limits to who can perform in drag. That was a constant theme throughout the show. Drag was described as being a commentary on the misogynistic nature of society, a parody of expectations of gender.

During Gallagher’s undergraduate studies, her and her friends frequented a local club, attending drag shows almost every weekend. Gallagher also said this was a time in her life that she was coming to terms with her own sexuality.

Mizery, Destiny and Dusty were diverse examples of what drag can be. All came out in almost larger than life costumes and hair, with fantastic and wild dance moves and skilled makeup. Performances ranged from dramatic Cher songs by Dusty Moorehead-Malletti, complete with her iconic mega-fro, to pop songs from Ariana Grande and Nicki Minaj performed by Destiny, as well as interactive, energetic performances by Mizery.

All of the queens offered a range of talents and personalities.

First-years Jordan Richard and Sashana Campbell were just a few of the audience members who were pulled out front in an end performance by the queen Mizery to show their moves. Neither had ever been to a drag performance but had said they had always wanted to go to one.

When asked on her favorite part of the performance, Richard said without hesitation, “The split [Mizery did]. Oh my god, I was so close, I was not ready for that split at all”.

The queens also took the opportunity to take on a more serious tone within the show.

Mizery took a moment to ask the audience if anyone knew who threw the first object at the Stonewall Riots. The room went silent, and there were plenty of guilty, downcast stares as people avoided eye contact with the queen.

One student, Lea Nolette, was brave enough to offer the answer: Marsha P. Johnson. That moment made a big impact, and Mizery used it to explain the need for people in the LGBTQ+ community to know their history and use it as power to progress.

“History is power. Knowledge is power,” Mizery said. “If we want to move forward, we need to know our past.”