For many students, the end of the academic year means cramming for exams, writing a final paper or putting together a complete portfolio.

But for Keene State College (KSC) film majors, it’s a little different. The end of the year means debuting a film these students have put time, some over a year, money and hard work into.

The Student Film Festival was hosted from Friday, April 28 to Saturday, April 29, with a Critical Studies Conference on Thursday, April 27.

On Friday, Film Production I (P1) and Film Production II (P2) students’ films were shown in the Putnam Theatre. While P1 consists of first-year students, P2 students are sophomores, such as Doug Whitney. 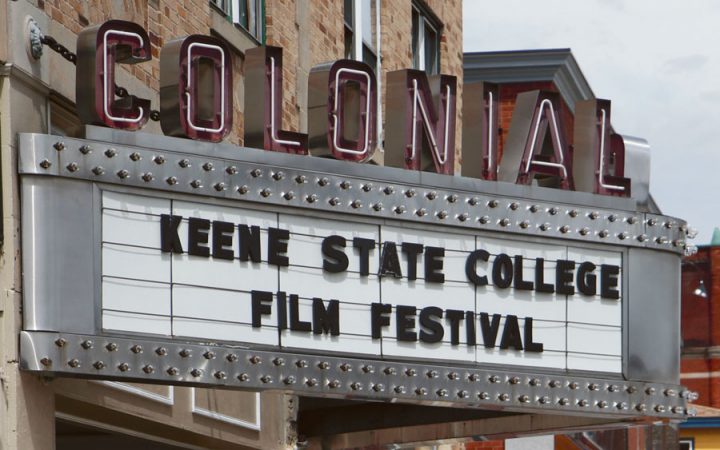 Whitney was the director of the film “Typewriters,” which focused on mental health. Prior to coming up with an idea for his film, Whitney had purchased a typewriter.

“Within the one night I had the typewriter, it definitely evolved into how I have struggled with depression and how plenty of my friends and family have struggled with it as well and a lot of people don’t understand quite what it’s like, so I kind of wanted to show people that it’s not just being sad; it’s this huge thing that’s part of your life and it’s constantly burdening you as you try [to get] though just a day,” he said.

All P2 students, such as Whitney, are required to shoot their film on Celluloid film.

During the Question and Answer session following the screening, Nora Colgan, the director of “Vacation with Chris,” answered a question regarding the use of the Celluloid film.

“I think the look of it is really what makes it worth it…especially for mine,” she said.

Colgan’s film used a combination of digitalized home videos and footage of her family on vacation in London. She overlapped the footage with the audio from the home videos. 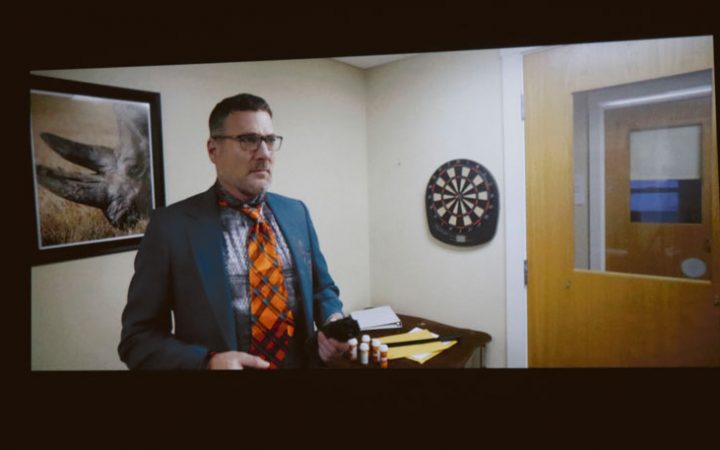 Also during the Q&A session, the director of “The Ride of Rohirrim,” Joseph Erwin, said that Celluloid film requires you to “…train yourself to shoot very concisely and be able to just have to say, ‘No I can’t do a retake, a re-shoot. I don’t have time for it,’ that sort of thing. It turns you into a very, very concise planner, somebody who has to plan things out and make sure it all works out right.”

The films the first-year and sophomore students premiered ranged in genres and length, the longest being 15 minutes and the shortest under 30 seconds.

The director of the shortest film, “Metastatic Neoplasm,” was Ari Gregg. Gregg combined pictures of cars, bears and the earth among various things to form his film.

“I think Ari’s [film] was a standout just because how fast it was and just how hard it made me laugh in the brief time it was on the screen,” audience attendee and first-year film major Zachary Rioux said.

Other film makers took a more serious route. Leigh Barron used her film “Butterfly,” to learn more about a health condition that had recently affected someone close to her.

“Someone actually really close to me had a stroke and I kind of didn’t really understand how someone could go from completely normal to just not so [normal] and reading on the internet really wasn’t doing anything for me, so I thought kind of putting it into a film with my own interpretation of it could help me really understand it,” Barron said during the Q&A session.

There were two sets of showings. The first began at 11 a.m. The second, which featured the longest movie of the entire event, a film entitled “The Mountain,” began at 2 p.m. and ran until 5:20 p.m., including the Q&A session that followed. There were a total of 15 films shown, with one being withdrawn.

“The Mountain,” was a 50 minute film inspired by true events. The main character of the film, Amy, witnessed her father die in a car accident when she was young. Following the incident, her mother saw a change in Amy and sent her to Lakeview NeuroRehabilitation Center in Effingham, New Hampshire.

Throughout the mistreatment, corruptness and abuse that Amy faces in the center, she finds love through her caretaker, Charity.

One of the film’s directors, junior Joey Copponi, explained the process of filming the story. 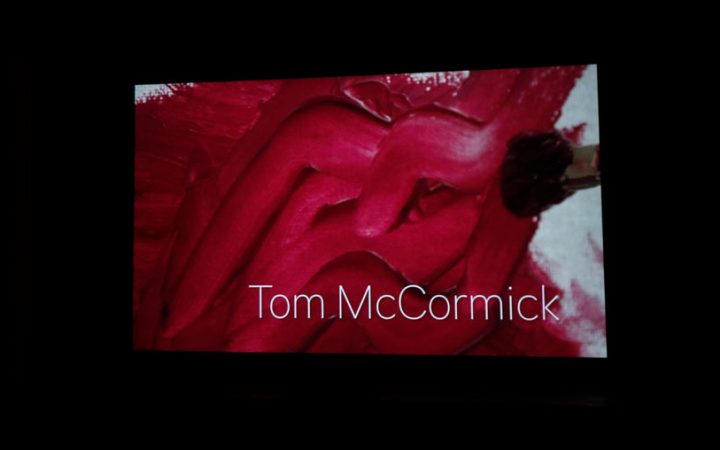 The crew of eight ended up “working closely with her, working with a couple other staff members who had worked there that were either involved in the story or were not…other patients [and] other families of other patients,” Copponi said.

Copponi said that although the film was “something that was close to [his] heart,” there were scenes that were hard to recreate, specifically scenes where physical abuse and sexual molestation occurred.

All in all, Copponi said he was excited for the debut of the film.

“It was something that from the get-go I was really emotionally invested in and having her involved makes it even more so,” he said. “It’s easy to want to make it really, really good when she’s going to see it.”

Amy and Charity attended the screening and invited the whole crew to their wedding in the middle of May.

Other directors also brought the aspect of real life into their films, such as Rehan Karim’s “Nostalgia” and Sultan Thahir’s “Home No Home.”

While Karim’s film displayed his time in America as an exchange student, Thahir’s film required him to travel back to his hometown of Amman, Jordan. Thahir’s film featured “conversations with family in Amman and with the refugees in Zaatari–an investigation into ideas of home, displacement and how we choose to occupy space,” according to the event’s program.

There were some films that followed a fictional plot line, like “Stain on a Schmuck,” “Forget About Us” and “Tenants.”

“Tenants” was a 20 minute film focused on the lives of four different people that live in the same apartment. It follows the story of the couple in the apartment who fight over the idea of a closed relationship, the dancer who is being forced to lose weight and the son who works to provide for his unhealthy mother.

The producer of the film and one of the six members of the crew was junior Keelan Brown.

“It’s been an incredible process and my crew had become so close…I’m very proud of how the film has come out and I think it’s a great way to show how we’ve all grown as filmmakers here at the school and it really is a nice way to kind of tie together everything that you learned here at Keene State and to see it on the big screen at The Colonial is just incredible,” Brown said. 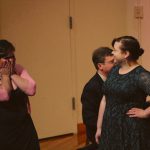 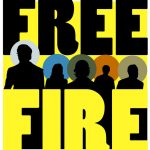