Adjusting to change isn’t always easy, but it’s something most people have to go through. This past semester, Keene State College’s (KSC) Orchestra faced a change in leadership.

For the past 25 years, Don Baldini acted as the director for various ensembles at KSC, including the KSC Orchestra.

Upon his retirement at the end of the fall 2016 semester, a new director was needed for the ensemble. 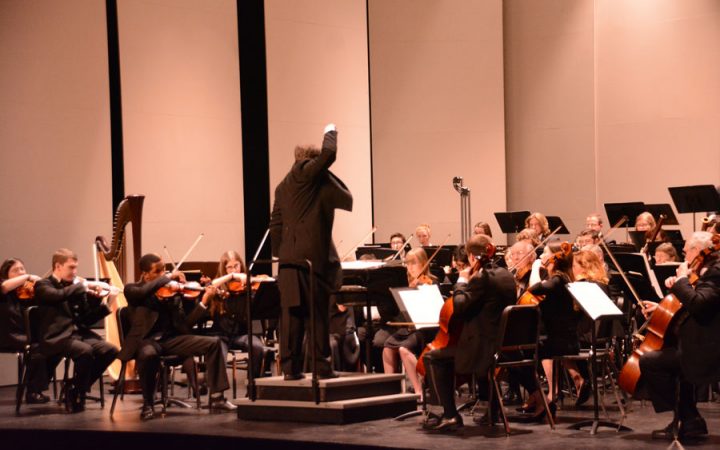 “It was humbling because I’ve known Don for a long time and he has big shoes…It’s a little intimidating actually in a way to take over for somebody who’s been that successful for that long,” Sharrock said.

Because the announcement was made so late in the semester, Sharrock only had a small time frame to prepare.

He and Baldini spent time discussing various aspects of the KSC Orchestra, from repertoire to recommendations.

“He was invaluable,” Sharrock said.

Another difficulty that Sharrock faced was the students.

He said, “Some of these people are graduating and Don has been their orchestra conductor for three and a half years and they knew who he was. They knew everything about him and he had done such a good job and now somebody else is coming in.”

Senior music major Mackey Pope, who was featured in a song at the KSC Orchestra’s Spring Concert, said that at first, adjusting to a new director was “rocky.”

“Everybody’s got to get used to each other all over again,” Mackey said.

Sharrock said, “By the time the concert came, I felt like [the KSC Orchestra] had really trusted me with the reigns. They’re the ones that are actually performing….They’re the ones that are putting their heart and soul out there, making sound, making music, being vulnerable to making mistakes out in front of the whole world and so for them to get to the point where they trust me with their hearts and their efforts is…quite an honor, really.”

Senior music education major Katrina Ferco, who was a vocal soloist in one of the songs, had known Sharrock beforehand.

“I already had a rapport with him and to work with him in this orchestra. I think that he’s really coming into a roll as a director,” she said.

“I know it’s a new experience for him, but it really came together this semester for him and for the whole group,” Ferco said.

“He’s set to run a great orchestra and he’s a great conductor himself,” Pope said.

The event featured two soloists and the world premiere of one song.

In the second song of the evening, Michael Bergson’s “Scene and Air,” from Luisa Di Monfort, Op. 82, Pope performed a clarinet solo.

Ferco said singing with an orchestra differs from simply singing as a piano plays in the background.

“You have this whole energy of so many different bodies. It’s almost like there’s a million heartbeats and you’re all beating as one heartbeat–its very cool–so getting the opportunity to sing with such a large group was really humbling as a musician, but also very inspiring as a musician,” Ferco said.

The last song played before intermission was Franz Schubert’s Symphony No. 8, “Unfinished” composed in 1822 and premiered 1865.

“It’s a very hard piece, lots of sudden contrasts, very technical at times, yet it needs to flow and have the same voice in all and I think they did a great job,” Sharrock said.

Leader said, “I think it’s good, I think that Director Sharrock is doing a good job with his first time directing. I haven’t been in the orchestra, but I’ve heard really good things about it.”

Dill was in the KSC Orchestra for one semester during his first year at KSC. “It was definitely different with Don Baldini still in it, but now that professor Sharrock is here, it seems to be organized a lot more modernly because he knows everyone pretty well already,” Dill said.

When intermission had concluded, the orchestra performed three more songs.

The first song was a piece written by KSC Music Lecturer Elaine Ginsberg.

The performance of her piece, “Morning whether to not you have ever dared to pray…,” was considered a world premiere.

“That was the best we’ve ever played it and I just think it really blessed the composer,” Sharrock said.

The final song of the evening was “West Side Story, Selection for Orchestra.”

Sharrock said Baldini recommended the piece for him and said had Baldini continued to be the orchestra director, he would have planned on performing the piece.

“I thought it was a nice touch of, I don’t want to say posterity, but it’s almost posterity with what they’ve done in the past and bringing that tie into it. That was gorgeous. I almost started crying. But overall, I’m just always, always, always humbled by their sound. I think that this group work so hard as individuals and as an ensemble,” Ferco said. 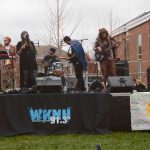