Plastic disposable water bottles have been known to cause environmental issues.

That’s why the Keene State College Eco-Reps started the Ban the Bottle campaign to ban plastic bottles from KSC’s campus. Started by KSC senior Victoria Drake, the Ban the Bottle petition was created with the sole purpose of banning all plastic water bottles on campus.

According to the KSC Eco-Reps website, over 70 colleges in the U.S. have had a complete or partial ban of disposable water bottles.

KSC senior and Eco-Rep Justin Landry said that the Eco-Reps were following the University of Vermont’s example by starting the campaign to ban water bottles.

Landry said he has been working on banning disposable water bottles for three years. Landry said they started off with student petitions and eventually were successful in banning the disposable plastic water bottles. Landry hopes that the Eco Reps could mirror that success by creating a petition.

“You walk everywhere and everybody has a plastic water bottle. You go into Hoot ‘n’ Scoot and they basically force one on you before you leave if you don’t have a drink. So stuff like that is just outrageous,” said Landry.

“We thought that there was something we could do about it. We figured that would be the easiest thing to do and the best way to get plastic water bottles banned from campus would be through a petition.”

Landry said that the majority of responses he received when he was petitioning for banning disposable water bottles were positive and said that there was only a minority that were against the petition.

“I think it (water bottles) provides a convenient way to have drinks like if you’re running to class or something,” said Mulhall. “I don’t think it’s as much of a problem as it could be; they definitely made steps to reduce the plastic that’s in the bottles.”

Featherston said that other people in the biology department have made the same effort in reducing disposable plastic water bottles by bringing their own bottles from home.

Featherston said that banning plastic disposable water bottles would make a huge impact. “It would make a huge effect on the amount of trash we generate and some of those bottles get recycled, but I know up here, I look in the trash in our labs and everybody’s throwing these bottles away. They don’t rinse them and put them into the recycling that’s available so a lot of them are not getting recycled.” 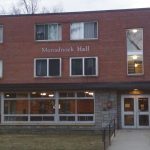