Professor Paul Vincent, the chair of the Holocaust and genocide studies program here at Keene State College (KSC), will be retiring after the 2017 spring semester.

When Professor Vincent first came to Keene State College, there was no Holocaust and genocide studies major. “I was in the process of writing a dictionary on the Weimar Republic, which was an area of study full of tragedy. I was asked, I think, two times by a history professor to teach a course on Nazi-Germany while I was working in the library, and, in the mid-1990s and I said sure,” he said.

Professor Vincent also said he owes a bit of his success to sociology professor Charles (Chuck) Hildebrandt, who passed away in 2008. “Chuck Hildebrandt retired in 1998 and he asked me to take over the Holocaust Resource Center he created. At the time, I was the most logical person to do this. That’s how I started, first dealing with Nazi Germany and the Holocaust, then gradually to the second World War because they are interchangeably connected,” he said. 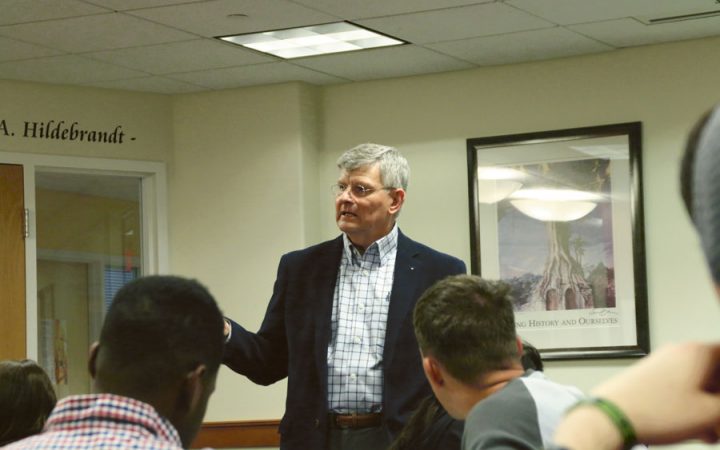 His interest in these studies originally came from his parents and his heritage. “My parents were both veterans of the war. My mother was English in the Royal Air Force. My father was a first generation Polish American. He started the war apart of the Polish Navy in exile and then went on to join the American Navy. So, the stories of their romance drove me towards this topic,” he said.

But obtaining a career in education was not as easy, “I was in the baby boomer generation, and there were so many of us getting our degrees. The market was thick with people already. I realized my chances were very slim, and so I ended up taking a master’s degree in library science. I thought that working as a library director first would introduce me to teaching, which it did,” he said.

Professor Vincent also talked about awards received in his past years of teaching. “I’m most proud of receiving the Distinguished Teacher Award in 2008. The thing that matters to me most at Keene State College is what I’m doing in the classroom,” he said.

Professor Peter Greene, a lecturer in the Holocaust and genocide studies department, described Professor Vincent to be a thoughtful, helpful and dedicated professor.

“Professor Paul Vincent deserves a lot of credit for the creation of this program and for putting Keene State College on the map nationally and internationally,” he said.

Professor Ashley Greene, another professor in the Holocaust and genocide studies, said that Professor Paul Vincent has always had an open door for his students. “He’s welcoming and a great mentor. He’s so generous with his enthusiasm for teaching,” she said.

She continued, “With strategies he’s mastered over the years for promoting student learning and his passion for the subject, he spreads this throughout the department. You couldn’t ask for a better colleague; it’s been a privilege.” 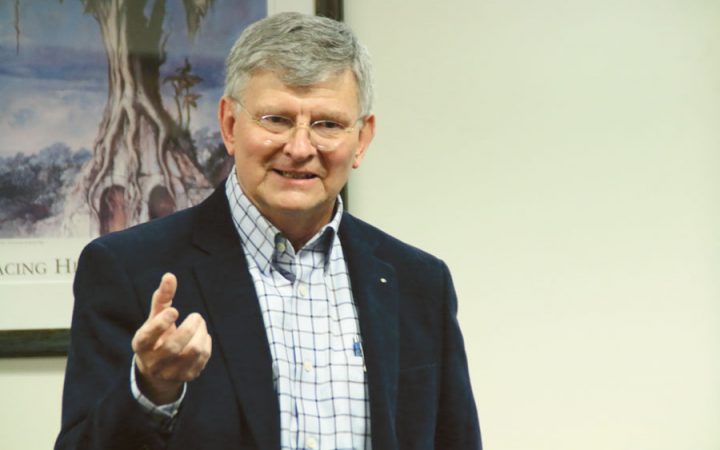 Marisa Benson, a senior at KSC, has taken two Holocaust courses with Professor Vincent and agreed with Professor Ashley Greene. “I am consistently impressed with Dr. Vincent’s teaching ability. His lectures, although dense, are deeply interesting and educating. Unlike many other history classes, he emphasizes concepts and cultural feelings, rather than facts and dates. This approach has been fascinating for me, drawing my attention to overall moods and beliefs in different time periods. This is especially powerful when talking about the development of the Nazi Party and their rise to power,”she said.

Professor Vincent discussed what KSC has given him over the years. “It has been a fabulous ride here at Keene State College. I have been given opportunities here that I’d never dreamed I’d have. I came here as a library director. I was only expecting to be here for five years, and it’s now been 32 years. A big reason that happened is because I had a lot of support here and I made some great friends along the way,” he said.

Professor Ashley Greene included his involvement from the beginning. “In any program, there are the people who are so instrumental in development and so passionate. Paul is that person. In many ways, he is the heart of the department and we’re here because of him. He will always be remembered fondly,” she said.

So what’s next for Professor Paul Vincent? He said, “I taught in Poland back in 2015. It was a thrill to work as a European historian being American, and I’ve been invited to come back after I’m retired, but I’m not sure if it’s going to happen yet. I’m also working on a book that I’d like to finish.”

Grace Kelly can be contacted at gkelly@kscequinox.com