‘MADE IN CHINA’ comes to the Redfern

Addressing sensitive, uncomfortable issues isn’t always easy, but for one New York City theatre company, their goal is to do just that.

Wakka Wakka Productions was founded in 2001 and aims to “push the boundaries of the imagination by creating works that are bold, unique and unpredictable…All of Wakka Wakka’s productions have been highly physical, overlapping in a wide range of styles, including grotesque, absurd and clown, incorporating elements such as object manipulation, puppetry, masks and original music,” according to the evening’s program. 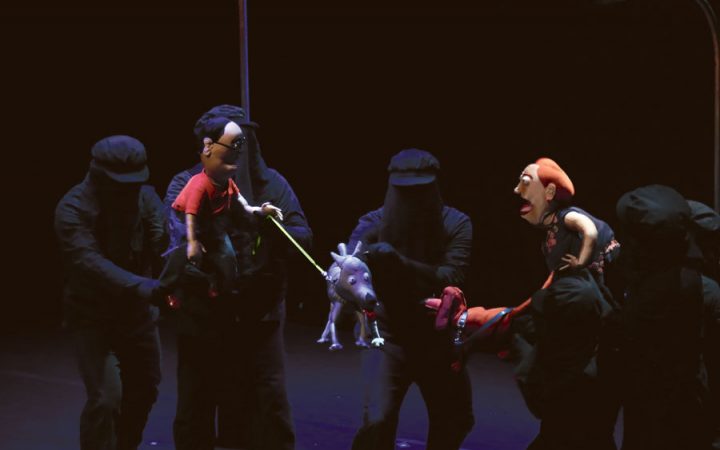 “A darkly comedic puppet musical inspired by true events, MADE IN CHINA is a fantastical exploration of human rights, consumerism and American-Chinese relations as told through the unlikely love story between an odd middle-aged American woman and her Chinese ex-pat neighbor… MADE IN CHINA features 30 puppets, seven puppeteers, music inspired by both American and Chinese traditions and animated video,” per Wakka Wakka’s website.

The show uses a mixture of nudity, cursing, crude visuals and language, comedy and songs to convey the message to its audience.

As audience members filed in, they were greeted by a dimly lit panda puppet eating bamboo in the middle of the stage. The stage sides and front were adorned with bamboo stalks and a sign that read, “Love Me Don’t Bother Me.”

The show started off with a recording of President Donald Trump saying the word “China,” or phrases regarding China, over and over as the panda sat there imitating him.

When the brief opener was over, the main character, Mary, ran onto the stage completely naked. She sat on her couch, talking to her dog, Lily, eating macaroni and commented on the cuteness of the pandas being shown on the television.

Mary broke into song, talking about how she lives a “life of decay,” and how she needs to break the cycle, “but not today.”

Overhearing her Chinese neighbor, Eddie, playing loud music, Mary confronted him and his grey dog, Yo-Yo. Eddie quieted the music and decided to call his children. He asked them to visit and told them how he taught Yo-Yo to talk.

Members of the audience laughed as Eddie told Yo-Yo to say, “I love you,” but Yo-Yo only responded with “hello.”

In the following scene, a now-dressed Mary took Lily out for a walk and encountered Eddie and Yo-Yo. Both Mary and Eddie lost control of their dogs, and Lily and Yo-Yo took off running. The dogs were caught by their respective owners, but not before Yo-Yo humped Lily.

Mary made her way to a store, where she bought Christmas decorations. When she arrived back at home, she discovered a handwritten note in one of the bags.

The note was from a Chinese labor camp prisoner. It asked the reader, Mary, to report the note to a human rights organization and said, “They beat us, kick us, not enough sleep, not enough food to eat.” Mary understood that it implied the fact that the prisoner was being tortured.

She felt compelled to do something about the note, so she went to Eddie. Eddie, who thought the note was a joke, yelled at Mary told her she was the problem.

Mary began to believe she was the problem, and tried to flush the note down her toilet.

When the note got stuck, Mary reached for the plunger, but was shocked when it began to sing, along with her food, house phone, handgun and other objects. They sang about how they were made in China, and Mary became ill.

She went to throw up in the toilet after the musical number, and was sucked in.

Moments later, Eddie showed up at Mary’s house and found Lily alone. He heard Mary’s cries for help and was led to the toilet. He, too, became sucked in.

The two arrived on top of a mountain in China. Once they made their way to the ground, Mary’s naivety toward Chinese culture became evident.

They met a rich individual named Dick Mills. He and his wife denied the claims of there being a labor camp where human rights are violated, but once Mary and Eddie left the stage, Mills and his wife began talking about them.

While Mary continued to break cultural rules, Eddie warned her to stop, but they were eventually arrested.

While in prison, they encountered many individuals, from Eddie’s deceased brother to Uncle Sam, before they escaped and were eaten by a dragon.

The story also unveiled Mary and Eddie’s love for each other, which was shown through one of the last scenes where the two had sex.

Post-coidal, Mary and Eddie decided they were going to publish the note on Facebook and send it to newspapers and news networks to get the word out. “All we need is to tell our story. All we need is to take a stand,” one of the puppets said.

Sophomore nutrition major Samantha Bryant was one of the many attendees of the show. “It was really interesting,” she said. “It was a cool commentary on just working together and making a difference and seeing the other side of things.”

After the show, six out of seven of the puppeteers, Ariel Estrada, Andy Manjunk, Stephen J Mark, Lei Lei Bavoil, Charles Pang and Peter Russo, along with Executive Producer Gabrielle Brechner hosted a Question and Answer session, where audience members could make comments and ask questions.

Russo, who played Mary, said, “I think we all have a personal attachment to this.” Originally, he hadn’t intended in being Mary, but gave it a shot. He said his inspiration came from his grandma.

Estrada, the puppeteer behind Eddie, mentioned that he is an immigrant child. “I’ll never know the kind of sacrifices they had to go through,” he said, telling one story of how his Philippine father faced blatant racism.

The cast members mentioned how they received mixed reactions from previous audiences.

Mark, who played various characters, spoke on one of the audience member’s comments regarding this.

He also mentioned how the recent election affected the audience reaction.

“And it was amazing how what’s going on in the world in this country influenced us and the audience reaction to things… The audience reaction [to the panda being accompanied by Trump’s voice] before the inauguration was hilarious and people really thought it was really, really funny in New York… and then after the inauguration, it was like too much…,” Mark said. “And there were definitely ideas in the finale that got shifted around based on what we were doing.

In addition to simply acting and singing, the puppeteers helped create and develop the show, puppets, stage and props.

“I don’t think a year ago I would have told myself that I would be doing a puppet show ever in my life, but that just that if you are open to what opportunities are presented to you, you’ll really surprise yourself with what you can accomplish using the skills that you’re learning,” Mark said. 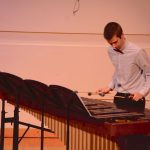