O’Connor, who has over 30 years of experience in law enforcement, is heading the safety department a month after the departure of the previous Director of Campus Safety Amanda Guthorn, who left KSC in February.

“Those other places I worked really functioned like municipal or city/town police officers.  They were fully sworn and did many of the same things the campus safety officers here did, but then could also do sort of a policing function, and so it’s a little bit of an adjustment,” O’Connor said.

Assistant Director of Campus Safety Leonard Crossman said that he sees O’Connor’s experience at larger campuses as a benefit to having her on staff now.

“She recognizes that each institution is unique and she’s adapting to that,” Crossman said.

“She has a completely different perspective than we do at the college… She has a different way of looking at it, and that’s exactly what we needed for this position at this particular time. [That] is somebody who can evaluate where we stand…and [to] be able to propose how to do things more efficiently.”

Crossman said that the staff have adapted well to the new leadership after 16 years with Guthorn.

“They’re transitioning well.  I mean any change can be difficult however… it’s also an opportunity to have a fresh start and to try new things and try different ways of doing things,” Crossman said.

O’Connor, who began her tenure as campus safety director the week prior to spring break, said that she had spent her first few days familiarizing herself with those in the Keene community.

“You spend your first couple days trying to meet as many people [as you can] and meet the officers and meet some key constituents,” O’Connor said.

Those who know her

The University of Connecticut Chief of Police and Interim Director of Public Safety Hans Rhynhart stated that O’Connor was able to accomplish a quite a bit during her tenure at the university.

“Chief O’Connor is an innovative and progressive leader in the area of campus law enforcement, as was exhibited during her 30 plus years working for and leading three state flagship university police departments.  At UConn, she was also the Director of Public Safety, which encompassed both police and fire departments, as well as building and fire code enforcement for all UConn campuses statewide.

Her positive attitude and seemingly endless amount of energy will serve the Keene community well.  If you could convince her to stay on permanently you would be winning the lottery,” Rhynhart stated.

However, O’Connor said that she will not be looking to make this a permanent position for her and will be on staff until the end of August.

During that time, she said she wants to help to find ways to solve issues such as commuter parking, look into how the department is staffed, look into the resources allocated to Campus Safety and how they are being used and make changes or recommendations based on her findings. She also wants to find better ways to prevent crimes such as sexual assault from occurring on campus.

She added that she also wants to hear from students about their concerns regarding safety.

“I should say I’m happy to be here. I’m looking forward to really seeing how much I can help the campus with their assessment of campus safety needs, and I think a critical piece of that is hearing from students [and] what their issues are around safety,” O’Connor said. 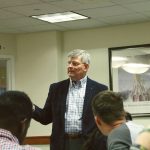