As a self-described introvert, Shay Riley will be the first to tell you she’s not that outspoken, but the week preceding Saturday, Jan. 21, she spoke out for beliefs she just couldn’t keep silent. The Keene State College 2013 alumna organized an event to liberate even the quietest of community members in conjunction with a worldwide response to President Donald Trump taking office.

The event known as Women’s March started originally as an effort in Washington, D.C., tasked with unifying individuals of color, orientation, race, gender and more, as well as recognizing issues such as environmental concerns, disability and reproductive rights. This is the first year the event has run.

Across the globe, participants rallied with signs. Some were directed at the new president personally, and others provided a more general call-out to the Republican-dominated cabinet. Keene protesters started at the parking lot behind the restaurant Margarita’s, then marched forward to Central Square down the street. Riley stood with others on the gazebo stage, who read from the unity principles of the founding Women’s March organization. These principles called upon topics such as working rights, civil rights and environmental justice to name a few. Cheers followed each category. 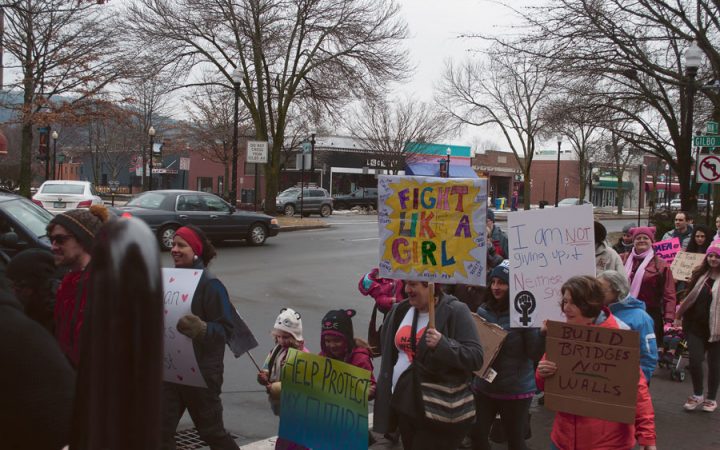 Riley said she was amazed by the response they had in Keene alone. “It just makes me so mindful of our community and country as a whole,” she said. “There’s such a local mindset and it makes me hopeful.” Riley said she wasn’t alone in planning the event. “I’m so thankful to everyone who made this happen; I just made the Facebook group and others helped,” she admitted. Riley explained she had been waiting for someone to create a local event and so when no one else did, she took charge. “I think this will show people at state levels and eventually higher that people care,” she said.

On the Facebook group for the event, 226 people said they were going with 245 people interested in the event. According to KSC retired math and education professor Tom Bassarear, over 600 people came to the Keene outing. “I taught math, so I think I know how to count well,” he joked. Bassarear said for him, this event was more about standing up in solidarity with those he knows will be affected more so than himself. “I’m a white male with a decent income. This is going to impact these who don’t have health insurance, people in minority groups,” he teared up a little, “this is going to impact my grandchildren.”

Many children were in attendance at the local event. Keene resident Molli Ringland brought her daughter Reagan to the event because she said she knew it would be a peaceful yet positive protest. “I wanted my daughter to see what it’s like to be a strong woman,” she said. Ringland said she was impressed by the amount of people who showed up. “It gives you a great sense of community,” she said. “Especially since there is so much at risk now with equality issues and our new president.”

Many others echoed Ringland’s concerns. KSC senior Natalie Haley came with her sister Emily. Both were fearful of the future under Trump’s administration. “We shouldn’t go backwards,” Natalie said,” we should be progressing forward.” Her sister, a student from the University of New Hampshire, said it was comforting to know others felt the same way. “It shows we’re not going to just take it. We’re showing awareness that things need to be better for all of us,” she said.

For Swanzey resident Mark Ames, this event was a clear message to and from the public. “It’s not just for women,” he said. “Other voices are not being heard and this affects people of different nationalities, religions, orientations; we need more solidarity.” 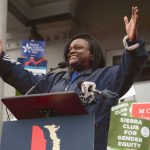 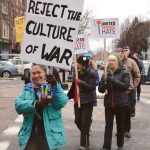