Dozens of members of the Keene Community gathered at Central Square in downtown Keene on Friday, Jan. 20 for a peaceful march titled the Inaugural March for Solidarity.

The event began at 1 p.m., just an hour after President Donald Trump was sworn into office. On the sidewalks lining Main Street, making their way back to the Keene State College campus, participants were seen holding signs and repeating chants regarding unification and support of one another. Many of the marchers chanted “united not divided.”

The march concluded outside of the Lloyd P. Young Student Center and was followed by a series of speeches by representatives of multiple student organizations at KSC on topics such as first amendment rights, racial equality, environmental issues and others.

One of the post-march speakers was Associate Professor of history Dr. Nicholas Germana, who encouraged open dialogue and respectful debate, while explaining the difference between free speech and hate speech. 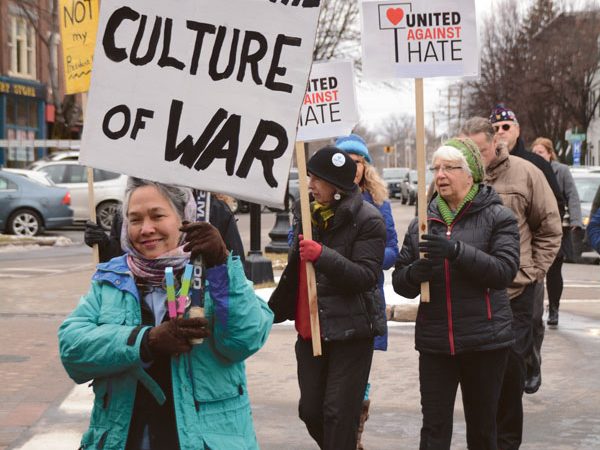 “If you want to engage someone in a dialogue, you have to begin by respecting them enough to recognize them as an equal member of your community… even if the differences between  you are so great, even if the debate that ensues is a passionate one, it has to be a debate that happens between people who recognize one another as having equal value in the community,” Germana said.

Event organizer and KSC professor Marin Sullivan said that the march was a way to bring the community together and show strength on inauguration day in a non-partisan manner. This was after hearing student’s concerns about the election in her classroom. “I really wanted there to be an opportunity for people to come together and to know that they’re not alone, that they’re not isolated,” Marin said.

First-year student Chris Roberge said that he was sitting in his dorm room feeling “distraught” after the inauguration when he saw the event on Snapchat and decided to join the rally.

“I think people needed something to get them through even today… It was really nice,” he said. “I think for me it definitely helps.” The first-year student also said that he thought more support would be necessary in the future.

This was one of multiple activism events which took place on inauguration weekend in the Keene area. Now that they are over, however, activists said that it is still important to be involved in the community. Senior Kathleen Dougherty who also spoke on behalf of the Holocaust and genocide awareness club said that events such as the inaugural march shows the Keene community that students care about what is going on in their area and country.

“I think that marches and events like this do an incredible job of showing [that] community members aren’t just here for the ride and here for the fun.  We know that we’re going into a world where we’re going to be people making decisions.” Dougherty continued, “…It shows KSC students that people in the campus care about what we’re doing and care about what we’re studying and want us to make the differences that they may not have been able to.”

Furthermore, Marin said that she would like to see more events like the one on Friday take place. “My hope going forward is that students who maybe attended today will see that putting on events like this are possible and welcomed and there’s a desire to have more of them,” Marin said. 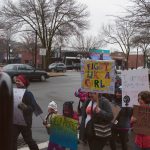 Women’s March in Keene Previous
Guthorn voices a goodbye Next 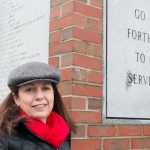