People protest against the President-elect in downtown Keene

Throughout the years, elections have been a source of division and controversy with this year being no different.

With tensions running high between Trump supporters and Trump protesters after the election results, protests throughout the country have taken place. One of these protests managed to take root in Central Square in downtown Keene.

The protest was put together in a week and roughly 13 people showed up holding signs that said, “Honk for Human Rights,” and a sign with a Jude star stating, “Never again, we shall overcome.” A few protesters held a sign that read “No one is free when others are oppressed,” and chanted this at passing cars.

Myers, who is also a resident  assistant, said she has been involved with the American Democracy Project in politics for a while and decided to organize the protests to oppose Donald Trump’s policies. Myers said she had previously organized a candlelit vigil to solidify that Trump isn’t representing their beliefs and values and to reassure people that they are valued and cared for in the community. 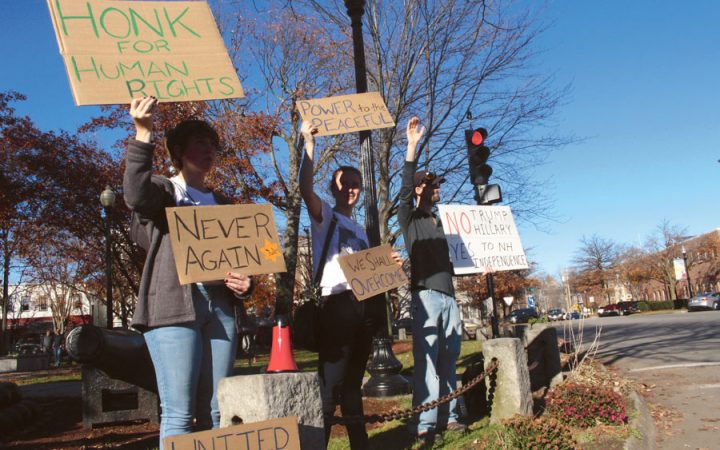 She said however, the vigil did not show their distaste for Trump’s policies and decided to change that with the protests. “I wasn’t ready to let the city of Keene get away without holding some demonstrations against this because a lot of his policy proposals would violate people’s rights. They would be bad for the economy,” said Myers.

She continued,“We decided we need an outlet to speak to their beliefs and to do so publicly so that other people can recognize that this is happening and are trying to rally some people off and get people re-engaged in democracy.”

Keene State sophomore and protester Morgan Sulham held a sign reading, “Water is Life,” to refer to the Standing Rock Dakota Access Pipeline to emphasize that Trump’s values are clashing with the welfare of those at Standing Rock. Sulham said she found out about the protest on Facebook and decided to be a part of the protest.

“Given the recent events in this election, I felt it was important to get out and to do something concrete, and a lot of people think protesting isn’t that important, but it is. It’s showing up and at least getting somebody that is driving by to think about this for a couple of seconds and hopefully more,” she said.

A protestor and resident of Keene Ian Freeman held a sign that read, “No Trump and Hilary, Yes to NH Independence,” said that he personally feels the solution would be for New Hampshire to secede.

“People value the idea of independence. They don’t see the federal government as being something that benefits them, [they see it as] something that is a burden. It’s something that pits people against one another,” he said, “so people fought hard against each other in the election and now they are going to gear up and fight each other again in four more years. So what’s the point of all that? Why not just go our separate ways?”

Keene State first-year Emily Foy protested alongside Sulham and held a sign that read, “Can We Talk About the Elephant in the Womb?” to refer to Donald Trump’s pro-life views and to protest  how Trump is against the woman’s right to choose.

She said she was holding this sign to get people to think about what they believe in and to question why Donald Trump is against the woman’s right to have an abortion.

Foy said that despite there being a few people that showed their distaste to the protests, she felt that her protest has generated overall positive reactions.

“A lot of the people have been supportive and honking their horns so it’s really nice to see. I just want to get my voice out there and make people think,” she said. “I hope that people driving by that see these signs, even if it’s just for a couple of seconds, they think about why people are protesting and think about their views and think about how their views can affect other people.” 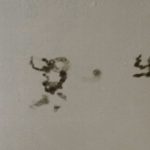 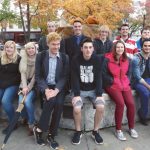