Above every other state, New Hampshire leads the nation with the highest student debt for college and university students.

The Granite State has many schools with much to offer, but could this factor deter future students from enrolling?

Another question that comes to mind is whether or not falling into so much debt will be worth it in the end once that degree is in hand.

Both questions warrant attention and deserve to be looked into.

Generally,most high-debt schools are located either in the Northeast or Midwest. To narrow in more on the Northeast, there are many excellent options for higher education in our neck of the woods. In an article published in 2013 by The New York Times, “graduates in New Hampshire, Pennsylvania, Rhode Island, Maine, Minnesota and Ohio were among the most likely to borrow and had some of the highest debt loads.”

Over the past three years, these high-debt loads have only gradually gone up for those graduating in New Hampshire.

According to the Institute for College Access and Success (TICAS), New Hampshire’s average student debt was $33,410 in 2014. 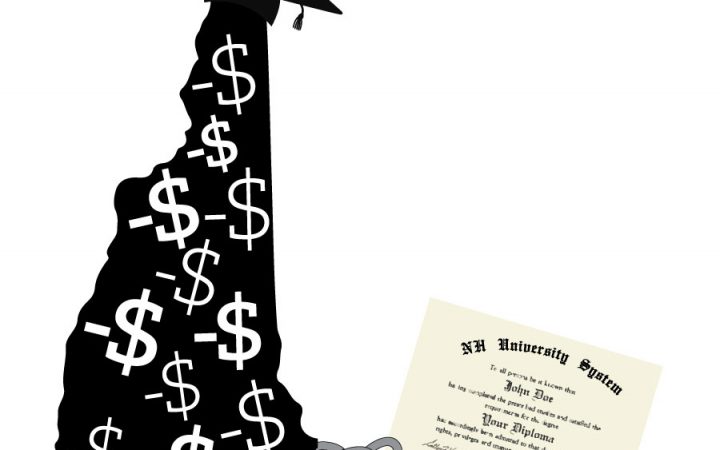 Keene State College’s average graduate debt for that same year was slightly above the state average, at $33,796.

As for 2015 graduates in New Hampshire, according to TICAS, this debt rose to $36,101, surpassing the second and third highest student debt states Pennsylvania and Connecticut.

According to WMUR, this was, “an eight percent increase over 2014…” As our state’s student debt continues to climb, so does the tuition rate at KSC.

Policymakers both nationwide and locally to New Hampshire are aware of these figures posing issues to students.

That same article posted on WMUR said, “Also, New Hampshire continued to have the highest in-state tuition in the nation in the 2015-2016 school year among public four-year institutions, according to the nonprofit College Board.”

With policymakers and those at the top acknowledging this costly problem, we at The Equinox would like to see the next step be taken with action sooner rather than later.

Talking about this is just the beginning. Something needs to change before students end up paying Ivy League-type figures for division three accommodations.

However, we at The Equinox also recognize that our region of the country is home to some of the top schools in the United States.

We also understand Keene State may not be at the top in the Northeast or even the state, but we won’t progress closer to that point if incoming high school students seek other institutions at the sight of our debt and tuition figures.

Our campus is home to many bright and creative minds, but unfortunately those traits won’t pay the bills.

We at The Equinox feel as though our state values  youth education and wants to keep New Hampshire natives studying in-state, but we don’t feel enough is being done to make this an affordable option. This is especially true when comparing to Utah’s 2015 average student loan debt of $18,873.

One could fly back and forth every other weekend for an entire school year and still not pay what one would pay in tuition, room and board and fees in New Hampshire.

As for any student studying at any college or university in the country, there’s always a concern in the back of some minds as to whether or not all these loans and hard work will pay off in the end.

That may not be known, as many factors come into play for every individual studying, but what is known is that those students studying in New Hampshire will have much more to pay off in the end than others around the country.