After posting about feminism on Twitter this past week, local woman Rosie Rivier received a stream of alarmingly ignorant comments from men who attempted to shut her opinion down by telling things like “stop making everything about sexism and get back in the kitchen!” However, after Rivier refuted the men’s arguments online, one of the responders claimed, “It was just a joke.”

Relieved, Rivier said, “Wow, I am so happy to hear that his negative comment aimed to attack my personal opinions and individual beliefs in a public forum was a joke.”

Hardly able to contain her laughter for long enough to speak, she added, “A really funny one at that! ‘Get back at the kitchen.’ So funny. How could anyone come up with that on their own?”

Rivier said that the man who tweeted back at her is named Isaac Gnorant and he is “literally so funny. I’ve never heard a funnier joke before in my life.”

Hinting at centuries of oppressed women who are subjected to a life without opportunities or the ability to make their own decisions, Gnorant’s joke was “just hilarious,” Rivier said.

Gnorant said that he is known for making jokes whenever women speak up online.

“Whenever I see a woman assert her opinions on the Internet, I make sure to tell a quick joke so that everyone knows I’m hilarious but also dominant,” Gnorant said.

According to Gnorant, everyone thinks his jokes are humorous and “not a cry for help at all.”

With a confident smile, Gnorant continued, “No, I swear. Literally everyone thinks this stuff is funny. Go back to the kitchen, ladies! See, everyone is laughing.” 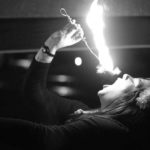 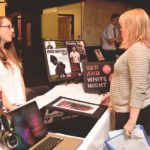