The 2014 Pumpkin Festival riots unfolded over a year ago, but Keene State College senior Dan McAuliffe is still affected by the aftermath.

McAuliffe, who is a film major, transferred to KSC in the fall of 2014 and said that the riots were his first taste of the college. He said he felt a “hollow” feeling in the wake of Pumpkin Festival’s mayhem, which ended up sparking an idea for a new film project.

“It was a traumatic experience seeing my college area just completely torn apart — it was turned into a type of war zone. It was hard to deal with, but my dad gave me the idea to turn my feelings toward the event into something creative,” McAuliffe said, “That’s when I decided to put together a documentary style film that just explored the 2014 pumpkinfest.” 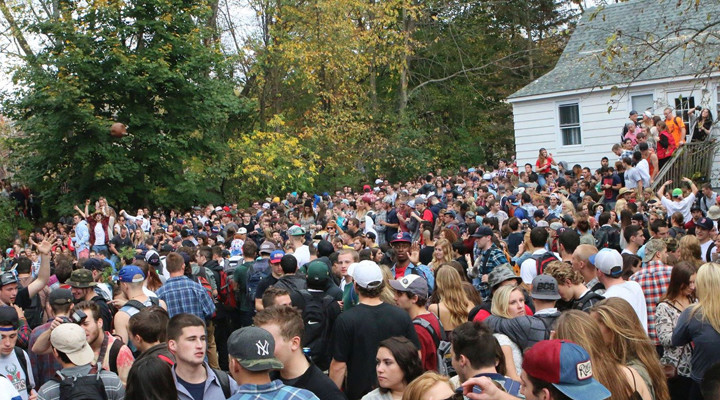 McAuliffe began work on his documentary, interviewing students who had footage of the riots and examining the chaos depicted. He was able to use these students’ footage to put together a short “pumpkinfest documentary that was only about 10 minutes long.”

This first documentary was completed, but McAuliffe said the short film only dealt with Pumpkin Festival itself “and it felt really shallow” to him.

“[The film] only talked about one campus and one issue. It hit me after participating in the Academic Excellence Conference that what was happening here at Keene is much more of a phenomenon then just one incidental thing,” McAuliffe said, “That got me thinking about other places where riots or extreme partying like this has happened.”

Starting work on a longer documentary, which will be released this May, McAuliffe said he began looking at the University of Massachusetts’s annual Blarney Blowout event, which also erupted in riots in 2014.

“I realized this type of behavior was happening at other institutions, not just Keene State,” McAuliffe said, “My evidence is actually proof that [riots] could happen anywhere.”

He said he then began collecting evidence of a college partying phenomenon that “grew exponentially over the years.” McAuliffe looked at outside forces that played a hand in the riots of 2014, like mass-media’s dissemination of college partying, movies like “Spring Breakers,” Snapchat, and traveling party company FinnaRage.

In his new film, which is titled “Dark Sky Paradise as of now,” McAuliffe juxtaposes the Pumpkin Festival riots with UMass’s Blarney Blowout, which is an event that still continues to this day. The documentary uses real footage from riotous college parties as well as interviews to define the phenomenon of extensive college partying and riot-culture.

McAuliffe said that, through making this film, he has found a formula for what creates a riotous college party.

“Basically students are exposed to some type of partying or extreme spring break imagery and they want to replicate that. That creates a desire for ‘If I just get enough people, alcohol, drugs in one place I can recreate this phenomenon and be a part of it.’ People sort of perform for the camera,” McAuliffe said.

McAuliffe has found that this type of behavior is then glorified and distributed through mass-media, which makes it look normal and appealing to other young people.

McAuliffe has been working on his film with many contributors, including interviews from KSC students Chris Wardlaw and Emily Mathieu, KSC alumnus and millennial experts Steven Parkhurst, as well as FinnaRage’s creator Trevor Finney. KSC Film Professor Ted White has been his mentor through the process and senior Sultan Thahir has lent a hand with filming.

Although Thahir was not personally affected by the Pumpkin Festival riots, he said he was excited to help out his friend out with the filming process. In turn, Thahir also touched upon the college phenomenon of college partying and the riots escalated.

“The riots happened because young adult men are inherently reckless and it’s interesting to have a day that allows that type of behavior to happen,” Thahir said, “It’s accepted by thousands of students who are drunk and also want to see something interesting that they wouldn’t see on a normal weekend at KSC.”

Mathieu, who was interviewed for McAuliffe’s film after a paper she wrote about riot culture for her ITW course, said that riots happen for many different reasons.

“I always say that if you prepare for war, there will be a war. There was a lot of talk before the weekend on the extra police enforcement there would be and how also this was going to be the best Pumpkinfest yet,” Mathieu said, “I think not only were people overly excited, but the amount of guests had a big role in the direction of the weekend. People came to Keene to party and that’s what they did. People didn’t have the attachment to the town or school to really think about the aftermath. There were also people going to Keene to try and start a riot and I think that also played a huge part of the weekend.” 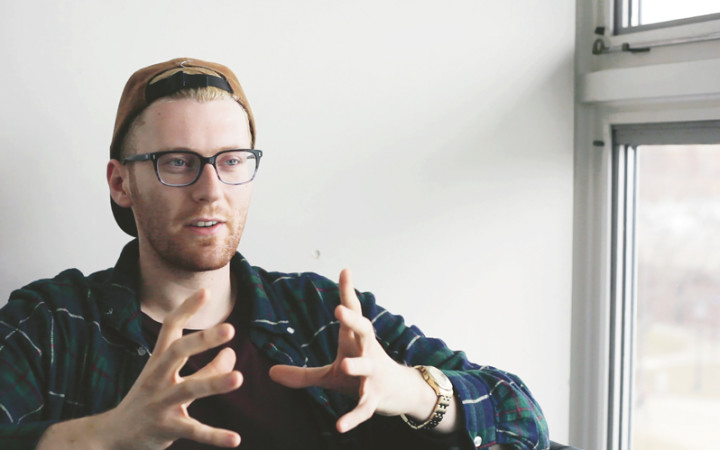 According to Mathieu, McAuliffe’s film will touch upon “what happened through the weekend, how the situation was handled and perspectives from students and other outside sources.”

Mathieu talked about the reactions that she think students, members of the community, and other audiences will have from McAuliffe’s film.

“Students that were at this event will feel strong uneasy emotions when watching this film because of the emotional connection people have to what happened,” Mathieu said, “Outside of KSC, I feel that people can take this film and use it as a source to see the patterns of rioting in our culture.”

McAuliffe said that now because tension has died down from the Pumpkin Festival 2014 aftermath, the reactions to his documentary will be generally positive.

“People were willing to move on from it pretty quickly. [The riots] were something people just wanted to get past. I feel like the timing of this film is perfect because it’s coming out much later and it’s kind of sums up everyone’s feelings about it,” McAuliffe said.

According to McAuliffe, his documentary will hit the “festival-circuit” after its May release at The Colonial Theatre in downtown Keene. He said he hopes his message of riot-culture will reach many audiences.