Local artists and musicians collided this past weekend at Good Fortune Jewelry for a night of creativity. The jewelry store, located on Main Street in Keene, hosted an art and music show in their back room on Friday, March 4.

Work by Keene artists Molly Fletcher and Dylan Jones was presented at 7 p.m. and local band Omoo Omoo, who had their first show playing as a full band that night, began jamming at 9 p.m.

Good Fortune Jewelry owner Roger Weinreich said the store has been hosting events like this for almost 25 years now and that he especially enjoys contributing to the local art and music scene.

“There are lots and lots of artists and musicians in Keene, and even around the world, but there are not enough places or venues for them to play or perform. Localizing it and making more options for these musicians means to put them in a store, coffee shop or sidewalks,” Weinreich said, “We want to open our doors to artists of all kinds.”

Over the years that Good Fortune Jewelry has been hosting musicians and artists, Weinreich said there has been a diverse crowd of people who have walked through the store’s doors.

Weinreich said, “We have local people come and go, a guy who writes songs for James Taylor, even Cheech from ‘Cheech and Chong’ was here. We host all kinds of people.” 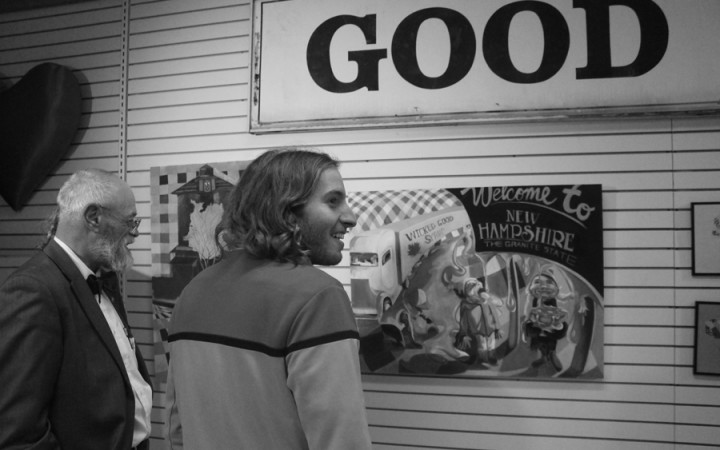 However, there is one ingredient that must factor into every artist or musician who plans to perform or present work at Good Fortune Jewelry.

“Our primary focus is basically just originality,” Weinreich said, “The only things we have in our backroom are usually music, comedy, art or theatre, and we welcome everyone but they just have to be original.”

Lack of originality wasn’t a problem for Keene State College adjunct professor Molly Fletcher, who was one of the two artists to display her work at the Friday-night show. Fletcher, alongside local artist Dylan Jones, said she worked with the local arts organization Machina Arts to put the show together in honor of Jones.

“Dylan is actually moving to Portland, Oregon, next week and we decided to have a co-show together and put our stuff out there together one more time before he leaves,” Fletcher said.

While Fletcher is successfully displaying her artwork at the local jewelry store and other places around town, she still described Keene’s art scene as “disparate.”

Fletcher said that shows like the one at Good Fortune Jewelry, which allow artists a place to display their work for no charge, are exactly what the art and music scene in Keene needs.

“It would be nice if more local store owners allowed us to use their space at night, even if it meant we put up a fresh coat of paint on their walls in return,” Fletcher said, “In the end, we’d just like to see this town moving in a more creative direction.”

Fletcher, who graduated from KSC herself in 2007, also said she hopes that events like these urge students to get involved with the local art and music scene.

“We’d love to get students involved – Art majors, art minors or even students just interested in art. It’s an opportunity for seniors to get their work out there and to get more involved with the city and as well as the campus,” Fletcher said.

While there were no KSC students actually playing in the show or displaying artwork, 2015 graduate Joshua Seamans said his roommate found out about it from the Monadnock Food Co-op, so the two decided to check it out.

Seamans said he believes shows like the one at Good Fortune Jewelry are important to Keene’s community because they give students and residents “something to do.”

“This kind of stuff is great. It gets people out, instead of just fleeting to the seventeen bars of Main Street,” Seamans said, “It’s cool to check out this kind of stuff.”

0Shares
0 0
‘Zootopia’ scores a zoo-tastic win for Disney’s... Previous
Student seeking gym buddy to immediately flake out on Next