‘The Revenant’ is revolutionary

If you were to compile a checklist for what a satisfying film should require, then certain components better be on there, including an enthralling story, stimulating characters, absorbing screenplay and steady cinematography.

Yet, there’s one component that many forget to leave on the list, which is the “experience.” Sometimes, whether a film has noticeable blemishes or not, an incredible experience might upgrade your outlook on the film. That’s why I write my reviews the day after watching a film; because I want to properly make sure that my opinion is a stable one. If I should still feel the same way the next morning, then I’ll know it wasn’t the experience alone.

This goes to show how powerful your surroundings can be regarding picture and sound. Living through a remarkable experience can leave a lasting impact on how you view a particular film. For myself, “The Revenant” was one of the most awe-inspiring cinematic experiences I’ve ever sat through.

1823 – Frontiersman Hugh Glass [Leonardo DiCaprio] survives day to day with his crew, traveling unmarked territory. That is, until he is ferociously mauled by a wild grizzly bear.

When John Fitzgerald [Tom Hardy], one of his fellow fur-trappers decides that Glass is dead weight, he veers off the the path and buries Glass alive. In a moment of unabashed exasperation, Glass crawls out of his impromptu grave and sets off on a self-seeking journey of vengeance and atonement.

From the dazzling opening frame, as the camera pans over a small creek, I was instantly transported back to a grim time of savagery where civilization was nothing but a concept. Right away, my heart was pounding by the vicious nature of the opening battle between the trappers and a Native American war party.

Director Alejandro G. Iñárritu and Cinematographer Emmanuel Lubezki are responsible for concocting some of the most visually striking cinematography my eyes have ever known. Feeling engaged with the environment is important but in this case, while I was engaged, I sat in my seat with distress.

This is not the wild frontier of the westerns from yesteryear, this is a raw and unforgiving habitat that grabs you by the throat and forces you to revel in the suffering of others.

Based on the man behind the legend, Hugh Glass is our poor victim for a majority of the runtime as he travels the bleak barren landscape of snow, lies and betrayal.

As a man on a spirit journey, he has to find himself after losing both his son and his sanity. The complications that should arise with a role such as this would be a strenuous challenge for any actor that isn’t up to the task, but for someone with the harrowing method of DiCaprio, it comes across as a confrontation worth taking on.

The much talked about bear scene is a masterful technical marvel of visual effects that will challenge the average moviegoer into thinking that DiCaprio was attacked by a living, breathing creature of nature. Only a select number of movies contain an iconic scene that’ll last the test of time, the bear attack is that scene as DiCaprio gives 110 percent to the performance.

Since the character is unable to speak throughout most of the film, DiCaprio is required to emote through the art of body language which makes you feel for him as a tragic character.

Using as little dialogue as possible, he expresses himself as a man with animalistic tendencies.

When Mother Nature plays him a bad card, he’s stuck playing a rugged game of survival of the fittest. Only the strong in heart will survive the depths of this frozen hell.

It’s for all of these reasons and more that DiCaprio should (and will) finally get the golden statue that’s been a long time coming.

However, as much as he carries the film, casting Tom Hardy was yet another brilliant decision by the casting director.

Fitzgerald is a cold-hearted bastard with an inferiority complex.

With Glass leading the expedition, he subconsciously views him as a blow to his masculinity, which eventually prompts Fitzgerald to treachery. At heart, Fitzgerald is a coward who constantly thrives on hurting others to feel good about himself.

Will Poulter, Domhnall Gleeson and Arthur Redcloud also give notable performances of flawed characters that would be good people in any other situation, had they not been born into such a harsh environment. Nobody is a straight-laced good guy which makes for an interesting character study.

As an unconventional revenge fable with a hauntingly beautiful score, exquisite long takes and profound cinematography that highlights the grotesque beauty of graphic frontier violence, “The Revenant” is one of the best films from 2015 that will live a long-lasting legacy with cinema’s finest.

I said it last year and I’ll say it again – Alejandro G. Iñárritu will take home yet another gold statue for Best Picture at the Academy Awards! 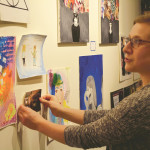