Student speaks up about conservative ideologies

The New Hampshire primaries are fast approaching and politics are on the minds of Americans. That great partisan divide is being drawn again, as it is every four years. Philosophical and political talks fill conversation both polite and aggressive. Gun control, abortion, ISIS, Education, Healthcare, Church and State are buzzwords heard around the water cooler.  Beneath all the buzzwords and debates, there is a driving ideological stance that separates liberal ideology from conservative. It is possible to distill this stance down to one variable: responsibility. The conservative ideology seeks for the individual to claim responsibility for his or her own actions. Conservatism seeks to put guns in the hands of the people and expects them to be responsible for their actions. Conservatism seeks to allow companies and people to choose their own healthcare plan. It expects families to take responsibility for the education of their children – namely, filling in the gaps left by public education and making accommodations for the child’s needs or gifts at home. College must be paid for by the individual because they are expected to make informed decisions about their career based on research, personal gifting and financial circumstance.

The conservative ideology is often seen as an unfair ideology because, on the political level, it does not take into account the statistical outliers. However, any argument based on fairness is insubstantial. This begins on an etymological level. Fairness is a relative term based on the preferences of the concerned party. Conservatism cares little for personal preference. Instead it sets standards for which people are expected to strive. These standards are based on an agreed upon notion of excellence, which is further based in the idea that attaining excellence is inherently good. In conservatism, great freedom is given to the people with the expectancy that they will take responsibility for their own excellence. In liberalism, we see the opposite. In a liberal ideology, we find that the individual does not seek freedom for responsibility, but freedom from responsibility. Even further, Liberalism does not expect excellence from the people, but deviance! Liberalism does not want the individual taking responsibility for their actions so it takes power away from the people. Guns are controlled because people are expected to be violent. Healthcare must be enforced legally because employers are expected not to take care of their employees. Education must be standardized because families are expected to be incapable of teaching their children. College must be paid for by the government because people are expected to make uninformed financial decisions. A liberal ideology ultimately denies the agency of its constituents by acting upon what is “fair.” What is determined to be fair is usually based in statistics. In these terms, fair is simply average. It is considered fair because it does not expect those who are below average to attain excellence. Furthermore, it is fair because those who are rated as below average are catered to until they reach an average level–an improvement! This has a thin veneer of desirability in that it gives the marginalized a shot at improvement. But it is not fair to those who dwell above the average in moral fiber, education or income because it limits them by taxing their potential to serve the marginalized. It is unfair to take guns away from everyone when some can use them responsibly. It is unfair to standardize education when there are those who strive beyond the standard. It’s easy to say that the popular, rich and smart can spare their resources for the outliers, poor and mentally challenged, but it’s not fair. If we’re going to have a system based in fairness, it must be fair to everyone including the privileged, fortunate and intelligent. After all, it’s only fair. Conservatism expects excellence from people and allows them freedom to attain to it. The freedom that allows people to attain to excellence also allows people to relinquish their responsibility therefor. As the primaries approach, ask yourself: will you exert your agency for personal and national excellence? Or will you vote for the government to impose mediocrity onto everyone in the name of fairness for the marginalized? The responsibility is yours. It always has been.

Lukas Irizarry can be contacted at lirizarry@kscequinox.com 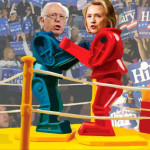 Student speaks up about conservative ideologies