Upon discovering that an animated film chose “Kung Fu Panda” as its title, it’s easy to write off as a nonsensical sounding children’s movie that will no doubt pander to the lowest common denominator.

Through not one, but two well-written action comedies, this series overstepped the name it was assigned. Since the cliffhanger at the end of the second film, we’ve been patiently waiting to see how the directors would cap off the trilogy. Did Dreamworks deliver on its promise?

Po [Jack Black], the Dragon Warrior with many appetites, sets off on another adventure when a since forgotten warrior threatens all of Kung Fu. After his escape from the spirit realm, Kai [J.K. Simmons], the Master of Pain, scours China, harnessing the chi of every master in Kung Fu.

Around the same time, Po is reunited with his long-lost father Li [Bryan Cranston] and the secret panda village that he once called home. When Po discovers that Kai is out for him, he has to train the village in the art of Kung Fu to give them a fighting chance.

By the third installment, this premise could have run itself into the ground, but Dreamworks is aware that this franchise has a special place in the hearts of children and adults alike. If it were to turn into a lackluster effort now, it would undermine the two films that preceded it. It does what a good sequel should do – add to the story, not do the same thing all over again.

Po is confident of his destiny as the Dragon Warrior but acknowledges his limitations. He still remains the lovable goof that he’s always been, never letting the prophecy take away from who he really is. His friendship with the warriors known as the Furious Five [Angelina Jolie, David Cross, Seth Rogen, Jackie Chan and Lucy Liu] remains stronger than ever.

Following the path of ancient philosophies, Po has an idea in his head of what his destiny entails, but must understand himself before he can attempt to fully fathom it–understand what lies within his heart.

This sets him on a personal as well as spiritual journey to comprehend the whole reason why he was bestowed such honor.

While “Kung Fu Panda 3” dabbles in the occasional bursts of drama, it never forgets that it’s first and foremost an action comedy. The rapid-paced editing ensures that the visual gags never overstay their welcome and allows the joke’s impact to hit a bullseye. Most of the humor stems from the spirited relationship between Po and Li.

When you get an actor such as Bryan Cranston, you can guarantee that he’s going to give it his all. I’m sure that he had a blast while recording his dialogue.

In every scene, he has such a delightful burst of energy. But when it gets to the serious moments, he knows how to turn the dad switch on and subdue himself.

He goes through the ranges of emotions that any father making up for lost time would – with excitement and trepidation, especially when he learns of a fearsome warrior coming to destroy his only son.

It was surprising to see characters we knew from the previous films significantly less.

However, this was probably predetermined to focus on building up Po’s antagonist.

And as the imposing warrior, Kai is suitable enough. Don’t get me wrong, J.K. Simmons is a phenomenal actor and he lends his voice quite well to the role.

The only problem is that he’s following up Gary Oldman’s menacing performance from “Kung Fu Panda 2.” Compared to him, Kai is a bit of a step down, but he’s not a complete waste of time.

His design is inventive and he manages to get a few funny lines in.

What the villain lacks, the film makes makes up for in spades with exceptional animation. While adhering to the traditional 3D animation of the narrative, it takes the time to show some love for the days of classic 2D.

It makes use of every advantage it has as an animated film to craft some awe-inspiring fight sequences with weight and levity in the choreography. Any sequences that take place inside the spirit realm are sure to dazzle any hard-boiled cynic.

While lacking the depth of its predecessor, “Kung Fu Panda 3” is still a solid finale to a now solid trilogy.

The good-natured story and the impressive animation are sure to equal a good night out at the movies.

Animated films tend to test better in 3D because they have the capability to transcend the depth of field. In this case, the ability to enter this universe in three dimensions is one that does come recommended. The colors are still vibrant and the action looks better than ever when it comes right at you. See it. 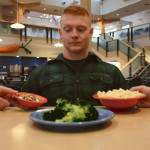