Why ‘healthy’ diet trends might not actually be the best choice

According to CBS News, the diet trends for 2016 include detox, cleanse and juicing, high protein and low carbohydrates, paleo, mediterranean and clean eating. CBS News also added that there is no “Holy Grail” diet that works best for everyone.

High protein and low carb is a diet that Keene State College sophomore and graphic design major Gabby Holveck said she has found success with. She said while doing the diet she lost a significant amount of weight.

Holveck explained that the diet shrank her portions and limited processed foods. She said her diet consisted of a lot of chicken, eggs, vegetables, peanut butter and fruit. Holveck said that the diet worked in the sense that she did notice herself slimming down. However, When going to the gym she noticed that she was tired. Holveck said that by the end of the day she was more tired than normal.

Tiredness wasn’t all Holveck felt. She said cravings began to bother her too. “While doing the diet I suffered temptation. I found though after doing it for a while you kind of train yourself. You don’t really want things anymore,” Holveck said. 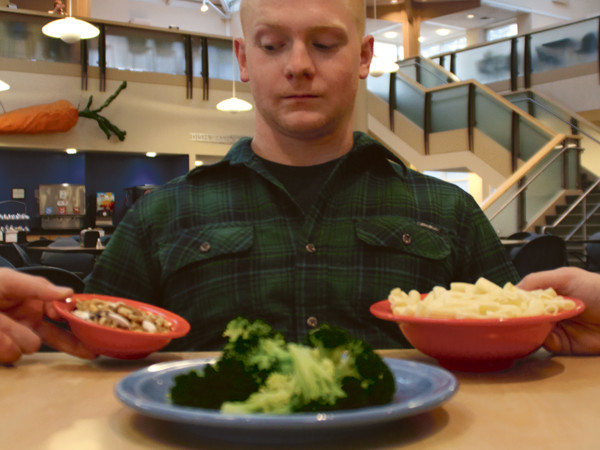 Something that Holveck said she craved often was sandwiches. “I love sandwiches, like big subs; that’s what I really wanted,” she said.

Holveck said that the strict diet lasted a few months.

“I kind of do it now, but not as aggressively. I adjusted the diet; in the morning for breakfast I’ll have a piece of wheat toast with peanut butter and banana on it,“ Holveck said.

More success was found by KSC junior and health science and nutrition major Amber Perkins who said she is a clean eater herself.

“I think that eating clean is important for everybody,” Perkins said. She continued, “In terms of looking at high protein and low carb, paleo and mediterranean, I think dieting is different for individuals. I think that everybody’s bodies react differently to different diets so it is okay to explore different things.”

Perkins explained that she has juiced before, eats clean most of the time and is a vegetarian.

“I found a three-day juice cleanse where you drink four juices and have one vegan salad. It was under a dietitian out of a place in Portland, Maine. I researched it for a while before going into it. I made sure that I would be getting enough calories and what kind of physical activity I should be doing while juicing,” Perkins said.

She continued, “When I did juice I felt really safe because I was so knowledgeable about what I was getting myself into. I think a lot of people who juice don’t really do enough research and I think that is why people run into problems. I don’t think that juicing is inherently terrible but I don’t think it’s a lifestyle. I felt really awesome after because for me it showed me that I probably had a serious sugar addiction and caffeine was pretty bad for me when I cut that out so I learned a lot about myself.”

“Everybody is human. It’s not that processed foods are bad or that any food is bad in general but what I have learned over the past few years of my life is that my body reacts best to clean eating, whole foods and a plant-based diet,” Perkins explained.

Perkins said she has lost weight by eating clean. She said that she has cut back on her sugar and sodium and carb intake. She also added that she feels more energetic and nourished.

On the opposite side of nutrition is the golden arches that globally we recognize as McDonald’s.

KSC sophomore and criminal justice and women and gender studies major Deven Freihofer is on her third year of working at McDonald’s and is a shift manager.

“I think McDonald’s impacts healthy eating in a negative way because it’s so quick, easy and available. With McDonald’s being cheap and fast, people tend to turn to eating it even though it isn’t healthy,” Freihofer explained.

Freihofer said that McDonald’s is not beneficial to people’s health. Since she has been working there she said that the company has made healthier options available to people. She explained that McDonald’s offers the option of a side salad instead of fries but that it is not advertised much because it is more expensive to give a side salad instead of fries.

“The entire business is speed and cheapness. Healthier options are more expensive and would take more time to prepare,” she said.

Emma Hamilton can be contacted at ehamilton@kscequinox.com

Emma Hamilton is a senior at KSC studying journalism with a focus in news media. She has been writing for The Equinox for three years now. Last semester she was hired as the Student Life editor of our paper and was just recently appointed for the News editor position. Though she is working in the print section of the profession while being apart of the Equinox, her career dreams include being a television news reporter. On campus, she is involved in several other areas. She is a honors student apart of the Morris-August Honors Program, the Class of 2018 secretary, tour guide for Admissions, a two-year new student Orientation Leader and also participates in Alternative Break community service projects.