Trump appears in Keene, students question his motives as President

Republican Donald Trump was front and center at a town hall meeting at Keene High School this Wednesday, September 27. As he walked out to Joe Esposito’s “You’re The Best Around,” Trump was met with a surprisingly vigorous applause from the audience.

It was then I realized that, unlike myself, some of the people there were actually there in support of a man whose hair I consider the eighth world wonder.

Before Trump’s arrival, the buzz I heard around campus was that a lot of people were going to see Trump speak as a joke. As the Keene State College campus, and I had assumed much of the town, holds some very liberal viewpoints, I figured that those attending the event would mostly be critics of the Republican. I was sadly mistaken.

The attendees formed a line that wrapped around the entire high school as they waited to enter and be seated.

Most were dressed as if they were about to meet the actual President of the United States and wearing political buttons supporting Trump.

The gymnasium filled quickly, forcing people to take their seats in the school’s auditorium and watch Trump’s speech on a projector. Some, according to Trump, had to be turned away at the door because there was no more room for spectators. Trump also made it a point to mention that there were a totaled 3,564 people in attendance “all because of [him].”

The first half hour to 45 minutes of Trump’s speech was spent talking about how great he was. There were a lot of numbers thrown out there that proved things such as how far ahead he was in the polls and how many people have attended his other speeches.

He also spent time making jabs at other candidates in the running by saying things like, “When Rubio (another Republican candidate) comes in, he gets twelve people. Nobody gets crowds like this, nobody.”

Because Trump’s ego is clearly larger than Mount Everest, these types of comments made me wonder if the snide remarks were because of some possible deeper-rooted mommy issues the Republican may have. 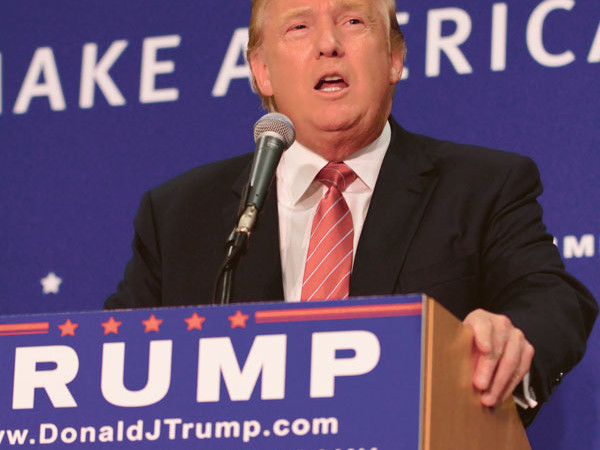 Additionally, in regards to the recent defunding of Planned Parenthood, Trump made one small and vague comment on the matter and then quickly moved on.

“Jeb (Bush) won’t fund them. I’m going to take care of them…No one respects women more than I do,” he said. “I love women – I cherish them.”

Trump got the most reaction out of the audience when bringing up his proposal for a new tax plan.

He introduced this plan by first asking the audience how many of them were small business owners. Obviously, being in Keene, NH, a good handful of the audience raised their hands.

He then made it clear that his “Reagan-esque” tax plan is designed to favor small business owners, create jobs, keep American companies from opening factories overseas and provide tax-relief for the middle and lower classes. He added that a single person making $25,000 annually would be excused from paying income tax.

Though I hate to admit it, Trump’s tax plan actually makes a lot of sense. This policy would benefit the majority of the U.S. while putting higher class citizens in the same playing field as middle and lower class citizens.

The reason this works is because Donald Trump is an outstanding businessman. When it comes to money, this guy knows what he’s talking about. That doesn’t, however, mean that he’s fit to run a country.

Multiple controversial statements were made throughout the night that might not have been tolerated if Trump were anywhere else but Keene.

He discussed how it was a “beautiful day” because the entire crowd stood up front rather than sitting in the back.

“It was wonderful. Because they were all up front, the cameras showed chairs in the back that were empty,” he said.

Immediately after this comment was made I scanned the room to see if anybody else, besides myself, felt offended.

I quickly noticed that the audience lacked much diversity at all, but I couldn’t help but wonder what the reaction would be if this was not the case.

It felt as if Trump were stuck in 1955 and was just seeing the abolishment of segregation for the first time.

Trump made mention that the U.S. is an embarrassment and that other countries hate us. Now Mr. Trump, I don’t know about you but I think we all learned in middle school that not everyone is going to like you and you just have to accept that.

However, instead of accepting that not everyone is going to like America, Trump had a solution.

“I will build up the military so strong, everybody’s going to be afraid of us,” he said. Yes, because that tactic worked out really well for Germany in 1933. I’m sure the world is totally down for another World War.

Despite his impressive tax plan proposal, most of the night felt as if I was listening to a teenager whine to his parents.

Trump swore twice throughout the course of the night, made comments such as “I’m, like, a smart person” and even tried to sound extra smart by making up his own words like “bigly.”

I left the event with a theory; Trump isn’t serious about running for President. I think his motive is to bring up all of the issues that other people are afraid to talk about so that opposing candidates will recognize them and something might finally be done to fix them.

Deep down, Trump probably knows he’s not presidential material; he really just wants to get the ball rolling in terms of discussing and fixing national issues.

The problem is there are people out there that are vulnerable enough to fall for his ridiculousness and who are going to vote for him.

If this man actually becomes our next president, I can guarantee you I will be buying a one-way ticket to Canada.

The dating culture: then versus now Previous
Importance in both creating long-term goals and knowing... Next

Trump appears in Keene, students question his motives as President