The residents of Keene united Saturday for “Rethink Marlboro Street,” an event that displayed the street as a sustainable and safe environment for pedestrians.

The Southwest Region Planning Commission, which currently has two Keene State College  Geography majors as interns, was  majorly responsible for the event. They helped portray Marlboro Street as a place where people could easily travel through everyday while also being an aesthetically pleasing sight.

Spectators spent the day riding their bicycles, utilizing the temporary bike paths on the street. A small park was set up on the corner of Marlboro and Adams Street for people to chat and play checkers. Several crosswalks were painted on the street as well as visible signs indicating that pedestrians were crossing.

Rethink Marlboro Street was part of the Complete Streets demo day, to show the community what it would be like to have neighborhoods that are safe and easy to travel through.

According to Healthy Monadnock 2020, “The goal is to create a street that is safer and more welcoming for all users while maintaining functionality of the street as a conduit for motorized traffic.”

A number of KSC’s Geography students participated in the event. 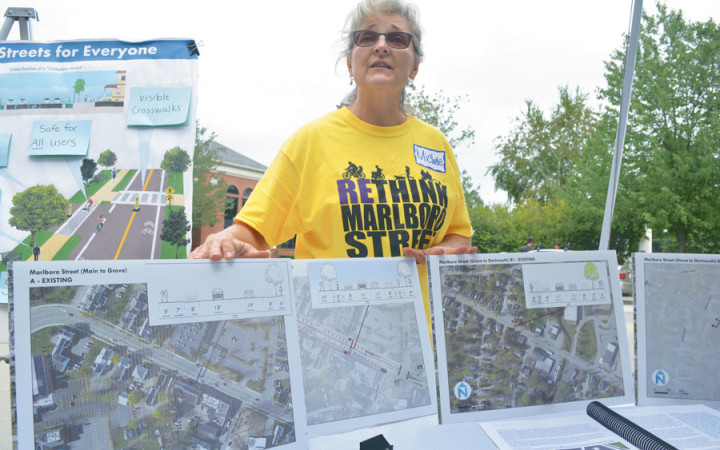 Geography professor Dr. Christopher Cusack said, “This is a topic that receives considerable attention in my urban geography and planning courses and many of our alumni have gone into careers in urban and regional planning, so there is always interest in these types of events among our geography majors.”

Mari Brunner, member of the Southwest Region Planning Commission, is one of the many people who made this event possible. Her goal was to showcase what could be done with the area.

“If you build a more walkable and bikeable place that’s more aesthetically pleasing and friendly, people will want to walk and bike more and will get more exercise,” Brunner said.

Marlboro Street has a 17-feet-wide travel lane in comparison to highway lanes which are typically 12 feet wide, making people like Brunner wanting to leave some of that pavement for pedestrians to walk on.

The street is  also a heavily trafficked outlet for commuters travelling both in and out of town and is a route many students must travel to get on and off campus.

These students said they all would like to see bike paths and crosswalks that are visible and easy to travel through  in neighborhoods surrounding campus and the downtown Keene area.

Lougee and Poulin said that they believe the current conditions of the street’s travel-ways are “dangerous” and “scary.”

Lougee recalled the time she almost got hit by a car while riding her bicycle across Marlboro Street.

“A guy just came speeding around the corner and almost hit me. I saw my life flash before my eyes,” Lougee said. 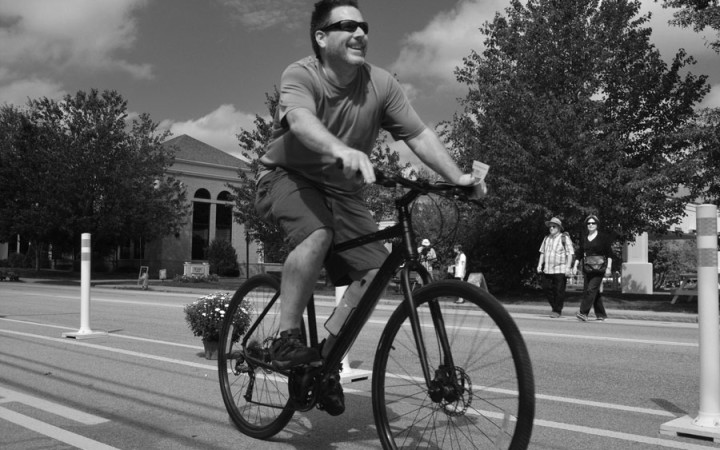 Keene resident Sarah Ells also considers Marlboro Street an unsafe route for traveling to Keene’s downtown area. She said she hopes that more bike paths that are safer and more attractive to take her children on will be installed in the near future. Petitions were available to be signed for the proposed street improvements on Marlboro.

These improvements include reduced parking on segments of the street and more vibrant, pedestrian-friendly sidewalks.

Dawn Kopczynski, a Rethink Marlboro Street volunteer, said that events such as these bring people out and inspire them to see the community as more.

She said this movement will improve the quality of life within our neighborhoods for everyone.

“There is more of a connection between everybody which changes the way we see each other and the way we feel about where we live,” Kopczynski said.

At the conclusion of the event, the KSC Geography club helped return Marlboro St. to its original state by removing plants and the tape that made up the bike paths and crosswalks.

The event was possible with the help of the Southwest Region Planning Commission, Healthy Monadnock 2020, the city of Keene and the Centers for Disease Control and Prevention (CDC).

Several others made donations and volunteered their time such as the Keene State College Geography Club, The Monadnock Cycling Club and the Monadnock Alliance for Sustainable Transportation.

Alex can be contacted at aenayat@kscequinox.com 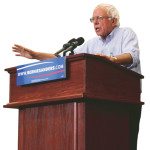