Why do students drink so much?

If a person threw up after eating Chinese food, would they keep eating the food? Chances are, probably not.

If a person threw up after a night of drinking, would they continue to drink, if not that night, but another?

These same questions were posed by Paula Phillips, a psychotherapist with a local practice in New Hampshire. Phillips explained that the need to escape, or reach an altered state of being, is the driving force behind many people’s decisions to drink.

“It’s a very reasonable thing, to drink, when you don’t have experience,” Allen Penrod, master licensed alcohol and drug counselor (MLADC) said. “It looks like fun, and everybody wants to have fun.”

Penrod explained that as alcohol is consumed the capacity to do most things is diminished, and the counterfeit experience of pleasure rises. The brain begins to associate drinking with pleasure — a false signal with repercussions in its aftermath.

With these false interpretations of happiness, the number of pleasure receptors in the brain is reduced, according to Penrod.

“When you wake up, you actually have less capacity to experience pleasure than when you drank,” Penrod said. This downscales the capacity of pleasure.

He continued to explain that the brain recognizes drinking as the only way to return to a satisfactory level of equilibrium.

“One of the things you have to notice about the word intoxication, the centerpiece of that word is ‘toxic.’ You’ve exposed 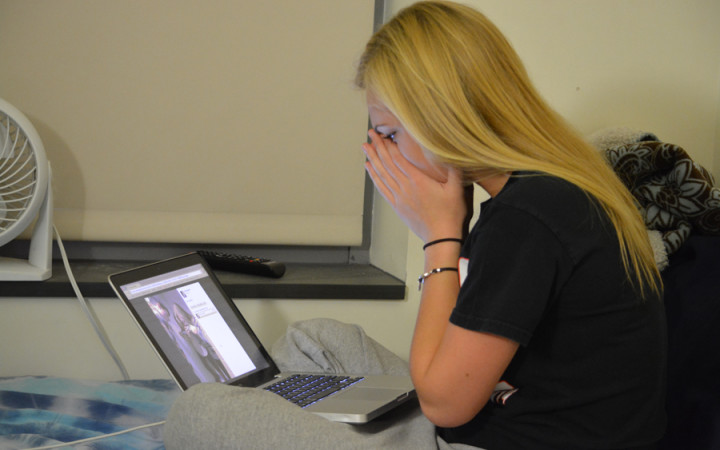 yourself to toxic chemistry, and the prefrontal cortex of your brain has enjoyed it,” Penrod explained.

“In essence, that part of the brain has learned to lie to the rest of the brain — where you do all your thinking, where your personality lives — has discovered what it likes, at the expense of every other part of your brain,” he continued.

People of all ages drink, and with all of these facts not specifically speaking to one age group in particular, the question is raised as to why alcohol abuse is often associated directly with college culture.

“The fundamental reason is simple — people at college ages have discovered that they are now in possession of a complete, or nearly complete, adult nervous system. And one of the design specifications built into a human nervous system, is that we should be enjoying ourselves all of the time,” Penrod, MLADC explained.

“So, when your life experience is not generating that, you ask, why? What is it I should be doing to accomplish full design of my nervous system?”

Penrod explained that it is human nature to want to have a “complete” life.

“People only use five to eight percent of their brain, and that’s why life doesn’t seem to be good enough,” Penrod continued. “We intuitively know we’re entitled to a lot more, but we don’t have a mechanism for getting there without learning how to transcend.”

Recognizing that drugs and alcohol are two of the possible solutions, he noted that while these methods don’t actually work, a person can’t know that until they try it.

“Most people look at the consequences of drinking, and say okay, it’s a bad idea — and that is true, but it’s not the whole story. The whole story includes: I am looking for a way to develop the rest of my capability, and some of that capability includes the capability of enjoying myself all the time,” Penrod said.

“When that’s not available, it’s reasonable to try anything, and drinking alcohol is one of them. It turns out that it doesn’t accomplish the goal, but since it does give a counterfeit experience of satisfaction and enjoyment, it then becomes a trap because of its other effects of diminishing our capacity of enjoyment.”

With the legal drinking age being 21, people usually find themselves turning of-age at some point during their time at college.

Combining this with the newfound desire to complete the nervous system and experience happiness, and the drinking culture surrounding the college environment skyrockets.

In an article published by The New York Times entitled, “Social Media Publicity Turns Wild Parties Into Trouble That Can’t Be Ignored,” the city of Keene is specifically highlighted for the riots that many college-aged students partook in.

The article acknowledges social media’s ability to, “draw young people to events — and to document behavior that then outrages residents who might not otherwise have noticed.”

Both Penrod and Phillips recognized how the social environments people find themselves in today impact how, when and why alcohol is consumed.

“People now have access to more powerful social tools than ever before, and that makes any mistake we make socially magnified very greatly over what it was in the past. That’s the primary reason why there’s greater risk now than there has been,” Penrod said.

He continued, “There’s much more stress in the environment. More stress in terms of just the level of stimulation that everyone is subject to — that magnifies our weaknesses, it magnifies the consequences of making mistakes, and it also makes it more likely that negative behaviors will become obviously negative quickly.”

With the addition of this social setting combined with social media, it can be said that the drinking culture found in today’s society is more heightened than ever before.

Scenes of friends drinking are displayed almost instantly to the world with the click of a button, and the same goes for the consequences that accompany the activity.

It is that much easier to know when a poor judgment call was made while under the influence, bringing concrete mistakes that can follow a person around for life.

“The stakes are higher in every direction,” Penrod said. “The amount of stress we subject ourselves to on a daily basis is many, many times greater than at any point that we can recall as a culture.”

Both Penrod and Phillips agreed that the decision to drink and the reasoning behind it differentiates with each individual.

A majority of the time, social drinking occurs simply to fit in, or to avoid any types of awkward encounters.

“Some of us continue to drink because it seems a reasonable response to social situations. We so much enjoy the ability to not feel socially awkward — there’s a billion reasons why people continue [to drink],” Penrod said.

Phillips added that drinking as an escape involves people looking to reach that certain heightened feeling, whether it’s intentional or not.

She also noted that while this escape may help a person relax or take the focus off of the problem, the next day not only do you have the same problem or issue, but you also have physiological effects that accompany it.