For over 35 years, the National Women’s History Project [NWHP] has worked to highlight females to “encourage girls and young women to think larger and bolder . . . Knowing women’s achievements challenges stereotypes and upends social assumptions about who women are and what women can accomplish today,” according to its website.

KSC President Anne Huot introduced each of the four recipients, noting “how important it is to continue to honor the accomplishments of wonderful women.”

Huot explained that, as KSC president, she falls into a profession that represents less than 30 percent of all presidents in the U.S., recognizing that gender equality still has a ways to go.

The first recipient of the night, junior Kerrianne Thomas, was nominated by her peers at student-run radio station, WKNH.

“Every time I have the opportunity to witness our students being their creative selves and putting themselves out there, I have a great sense of pride about what it means to be a student at Keene State College, what it means to earn a degree that is fundamentally founded in the liberal arts, and fosters that creative spirit,” Huot said as she began to introduce Thomas.

As Thomas accepted her award, she explained how her high school fears of inadequacy quickly turned into success during her time at KSC.

Within the first two weeks of her first year at KSC, Thomas found her passion in working with WKNH, the radio station on campus that she now co-manages.

KSC’s Peggy Rae Johnson was the next outstanding woman to be highlighted, being introduced as “a passionate crusader for the arts, theater and students.”

Johnson, whose colleagues referred to her as “a legend in educational theater,” has put on over 30 productions in her time at KSC, including writing and directing the “No Zebras No Excuses” play for freshman orientation each August. 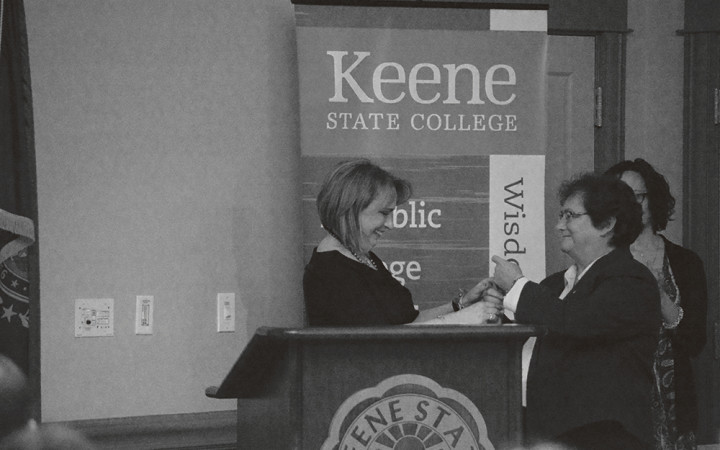 Johnson’s acceptance was brief, but earned her a standing ovation from the crowded Centennial Hall, as she began her speech saying, “My parents had two daughters officially. Unofficially, I was my father’s son.”

She went on to explain how her father shared with her the knowledge that the world was open to her own choices — until it was time for her to go to college.

“It was in college that I became acutely aware of the role of gender in our society,” Johnson continued, “That was where I was told that, as a theater major and more importantly as a woman, I was expected to work twice as hard to be considered half as good.”

Johnson said she was proud to be a part of the journey of women who are helping to contribute “to the growth of theater, our culture and to our political perspectives.”

The next honoree, Sarah McKenzie Hoskins, accepted her honor on behalf of those she dedicates her time to help.

“I accept this honor on behalf of survivors of domestic and sexual violence, and the hidden witnesses — the children who, most often, hide when their worlds are turned upside down again and again. I am amazed and humbled by their strength, bravery and resilience,” Hoskins said.

Ending her acceptance, Hoskins turned to the audience to provide a few final words.

“I see all these young women and young men here, and I want to say to you, ‘Be strong, be bold and go for it,’” Hoskins concluded.

The last recipient of the night, Terrie Norelli, took time to highlight her newest program, the New Hampshire Women’s Foundation — a merger of several women’s organizations in our state.

“I think if each of you closed your eyes and tried to envision here in New Hampshire a place where there is social, economic, political and gender equality, you would see what we see,” Norelli said. “Because our mission is to seek opportunity and equality for girls in our state through research, education, philanthropy and advocacy.”

The ceremony concluded with words from Senator Molly Kelly, reading a letter from U.S. Senator Jeanne Shaheen, who was unable to attend. Shaheen wrote that it is critical for women to realize their full potential in order to achieve growth as a nation.

The theme for this year’s NWHP was “Weaving the Stories of Women’s Lives,” a title that accurately fit each recipient, as noted by one of the speakers.

These four women joined the nine 2015 national honorees, of whom were acknowledged through a continuous slideshow as students, faculty and citizens from across the state filtered into Centennial Hall.

These nine women were later honored again through an oral performance by KSC theater majors Kara Girardi and Danielle Roberts. Girardi and Roberts took turns paying homage to the honorees, reciting the words of each woman who have collectively sought to bring positive change to society.