New hair trends serve as a form of self-expression

I was walking through the streets of New York City alongside 400,000 other proud participants at the People’s Climate March in September when it happened.

Through mounds of people I saw the tousled dirty-blond hair all bunched and tied atop his head in a perfect man bun.

He had a sunflower stuck right through his hair by its long green stem.  The golden-blond tone of his hair was natural and his bun seemed to sit in that perfect place between the top and back of the head. I had never known what it was like to fall in love with a man bun until that very moment. 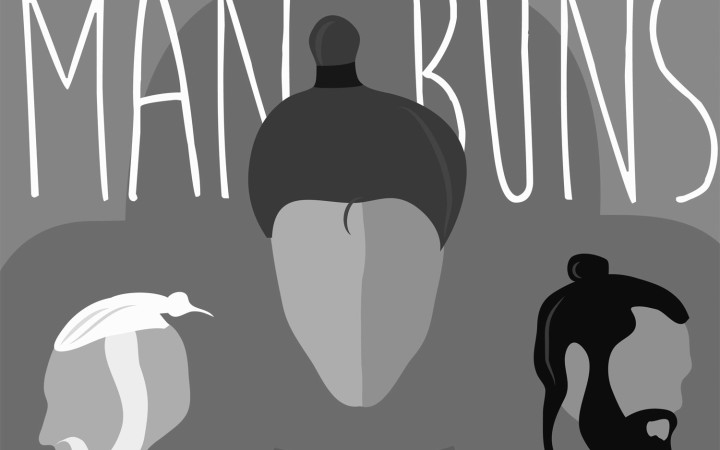 Since then I feel as though man buns have sprouted from even the most unexpected guys, or perhaps I just began taking notice.

Either way, the trend has taken off as of late and the girls are going wild over it. Facebook feed is flogged with photos of man buns or Buzzfeed articles about the newest hair sensation. Just exactly where the trend originated is difficult to say, mainly because the style has existed in many variations over the centuries.

If you want to really dissect the origin of the hair creation, you may suggest that Buddha first sported the man bun. Although I could take a position for or against man buns, I do not like to generalize.

I have seen man buns, like the one in New York, that make me melt in adoration at the very sight. I have also seen man buns that make me really wish it was not rude to approach a stranger and ask if I could fix his hair.

In either case, man buns exist, and like any other trend, there is no way around it. I remember dedicating myself to a variety of trends over the years that now, looking back, I realize never suited me. In the eighth grade I wore a hot-pink fanny pack as a pencil case. Then, during high school, I wore ripped jeans and Hollister tees.

Over the years I have tried a variety of fads that seemed ideal at the time and later ditched them, realizing I was not being true to myself. It is crucial that we recognize if we like a trend or are simply wrapped up in one. Man buns have swept the nation and are likely to continue popping up until a new hairstyle steals its position. Though I do not think a man bun defines the man, I do think that it has to make the wearer happy, otherwise it serves no purpose.

I am highly against “trends,” as the term itself implies that you are following a fad. Find a hairdo that makes you feel the most like you and wear it proud. Do not dye, cut, or pin your hair in any way unless it is just what you want. Hair is one of our most natural and up-front forms of expression, so it is important that we are honest with our look.

If you like to deal with long hair and the frustrations of brushing, conditioning and tying it up, then by all means, but do not be ashamed if you are more of the simple buzz-cut kind of dude.

Arline Votruba can be contacted at avotruba@keene-equinox.com