On Tuesday, March 22, the Keene State College Student Assembly discussed the Planning Council and its attempt to look at revisiting the mission statement and goals of the college.

“We would like input from all constituencies on campus,” Bethany Morin, chair of the Student Assembly, said.

Representatives coordinating the 7-Day Film Competition requested additional funds as did members of KSC Pride for an event called All the Kings Men, to be held on Thursday, April 7.

Applications for the annual Leadership Award are being accepted until Friday, April 8. Students may nominate their peers who demonstrate strong leadership qualities in the KSC community.

The award will be presented at a banquet on Friday, April 29.

Student body president Donnie Clemmenson discussed plans for an Expo Center that is being considered for campus.

“We’re in land negotiations to get the land to build the Expo Center,” Clemmenson said. “It takes time and will take a couple of years.”

Clemmenson said that original plans had included an ice rink, however, the hockey clubs on campus would not currently be able to afford upkeep. The Expo Center would serve both the campus and surrounding community.

Colin Daly, student body vice president, discussed the idea of putting teacher and class evaluations, which KSC students fill out at the end of each semester, online. “Putting it online would benefit students,” Daly said.

He said he hopes that not only would students take the time to fill them out adequately rather than rushing to get out of class, but that they could remain online for students to see what their peers say about teachers.

Allie Bedell can be contacted at abedell@keeneequinox.com 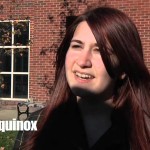 Get Out and Vote Previous
The best of war films Next